Soybean planting is slow everywhere in Brazil, but the progress is faster in southern Brazil where there have been some rains over the last two weeks. Any significant delays in the soybean planting could have a negative impact on the safrinha corn and of course, and it would delay the start of soybean exports out of Brazil.

Mato Grosso Soybeans - According to the Mato Grosso Institute of Agricultural Economics (Imea), the soybeans in Mato Grosso were 3.0% planted late last week compared to 18.7% last year. This represented an advance of only 1.3% for the week. The most advanced planting is in the western part of the state where 13.7% of the soybeans had been planted compared to 31.1% last year.

This drought in Mato Grosso has been the worst in recent years with the rainfall during September down 77% compared to average. The rains generally start in western Mato Grosso first and that is the case again this year. 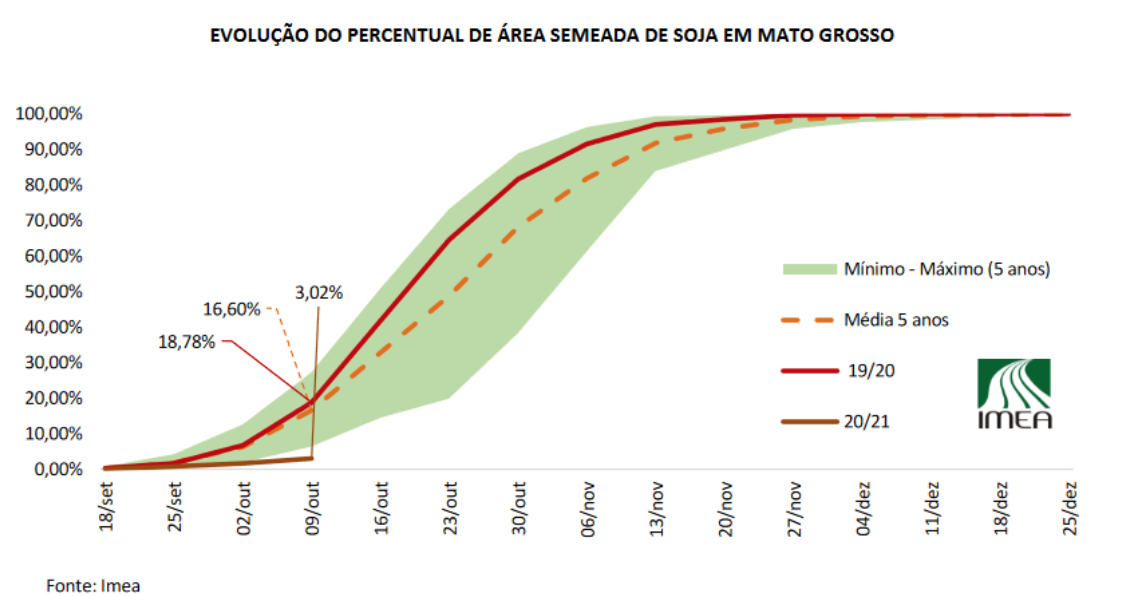 Parana Soybeans - The Department of Rural Economics (Deral) reported that 8% of the soybeans in the state had been planted by earlier last week and that the crop was rated 1% poor, 17% average, and 82% good. Last year at this time, 22% of the soybeans had been planted. There have been better rains south and east in the state with the northern and western areas of the state still waiting for enough rain to start planting their soybeans.

In the municipality of Cascavel, which is located in western Parana, farmers waited for rains last week to start planting their 2020/21 soybeans. If they can finish their planting over the next two weeks, it will give them enough time to plant their safrinha corn before February 5th, which should guarantee good corn yields, if the weather cooperates. If the safrinha corn is planted after February 5th, the yield potential generally starts to decline on a daily basis.

Some farmers have already speculated that they may not be able to plant their safrinha corn until late March or even early April. Any corn planted that late would run a very high risk of low yields due to potential frost before the corn is mature.

The soybean planting in Cascavel has been delayed due to hot and dry conditions. For the lucky farmers who received rain 20 days ago, they have been planting since receiving the rain. Farmers in Cascavel have forward contracted 35% to 40% of their anticipated 2020/21 production for prices in the range of R$ 85.00 to R$ 98.00 per sack (approximately $7.28 to $8.40 per bushel). It was probably a good move on their part to have only sold 35% to 40% of their anticipated production because prices are now much higher.

Other news out of Brazil concerning soybeans: