Brazilian farmers are just getting started on harvesting their safrinha corn with 2-3% of the corn harvested. This is a slow start compared to last year when approximately 8% of the corn had been harvested. Early yield reports are highly variable and generally below what had been expected, and I suspect it will continue this way for the entire harvest season.

Brazilian corn farmers are facing headaches as they harvest their safrinha corn. The biggest problem is reduced yields which raises the possibility that some farmers may not be able to meet their forward contracts for promised delivery of corn. These farmers will have to renegotiate their contracts with the grain companies. Farmers are also worried that the extended corn harvest may leave them little time for tillage work or corrective soil measures before its time to plant their 2021/22 soybeans.

There are meteorologists in Brazil forecasting that the start of the 2021/22 planting season may be delayed once again by dry weather. South-central Brazil is currently amid one of its driest periods in over 90 years and the dryness may extend into September and October. If that forecast verifies, it would probably not mean very much for Brazil's soybean production, but it would mean another delayed planting of the 2021/22 safrinha corn.

Early corn yields out of Mato Grosso continue to be highly variable due to the late planting of the corn and the irregular rainfall during the growing season. 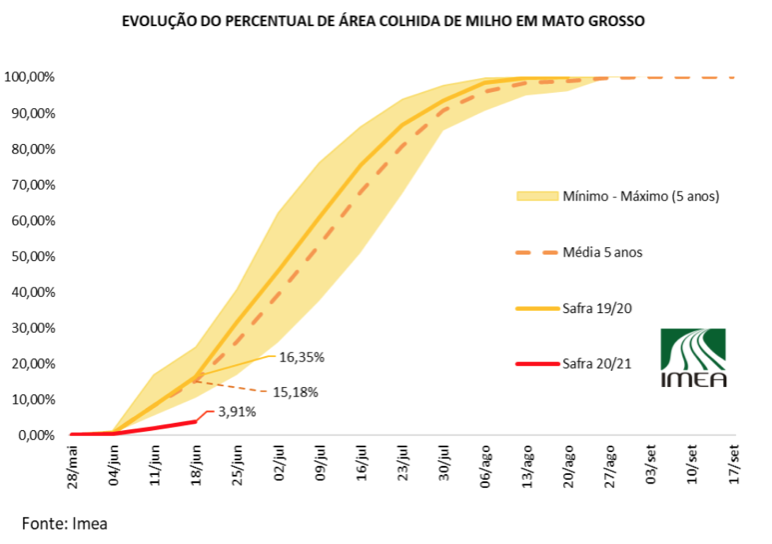 Parana Safrinha Corn - The Department of Rural Economics (Deral) reported earlier last week that 1% of the safrinha corn in the state had been harvested and that 67% of the corn is filling grain and 13% is mature. The corn was rated 32% poor, 45% average, and 23% good.

Early corn yields out of Parana are highly variable due to the prolonged period of dry weather after the corn was planted. In recent weeks, the rainfall in Parana has improved which may help some of the very last planted corn.

In the municipality of Goioere, which is located in western Parana, farmers are expecting corn yields 30% to 60% below what was anticipated at the start of the season. According to the president of the Rural Syndicate of Goioere, the earlier planted corn encountered a 55-day dry period when the crop was developing resulting in losses of 30% or more. The later planted corn received a rain when it was germinating, but it then stayed dry until the ears had formed. The recent rains came too late for the corn which is expected to have losses in the range of 60%.

The safrinha corn harvest in the municipality will not be completed until about August 15th, which is less than a month before the new crop of soybeans might be planted starting on September 10th. Farmers are concerned if there will be enough time to complete the soil management practices before the soybeans are planted.

Farmers in the municipality have forward contracted approximately 30% of their anticipated production, but with losses of 30-60%, there will not be much corn leftover to price, especially for those with the lowest yields.