The safrinha corn in Brazil is 20% harvested compared to 35% last year according to AgRural. This represents an advance of 8% for the week. Mato Grosso is the state with the most advanced corn harvest at 35.5%. The corn harvest in Parana and Mato Grosso do Sul is just getting started.

Safrinha corn yields in Mato Grosso are variable. Many local municipalities are reporting lower than expected safrinha yields, but Brazil's SLC Agricola reported that their corn yields are better than expected. In an interview with Reuters last week, SLC's Director of Operations indicated that the company expects to harvest between 95 to 105 sacks per hectare (90.6 to 100.1 bu/ac) in its Mato Grosso operations. Last year, their average safrinha corn yield in Mato Grosso was 122 sacks per hectare (116.3 bu/ac).

He attributes the better-than-expected yields to rainfall that occurred during April which helped the later planted corn. SLC's corn harvest was 21% complete last week.

SLC has completed the purchase of two other farming companies, Terra Santa and Agricola Xingo, so their area under cultivation during the 2021/22 growing season will be 660,000 hectares (1.63 million acres). The director of operations indicated that they have already purchased 90% of the inputs needed for their soybean, corn, and cotton crops in 2021/22.

Municipality of Sinop in Mato Grosso - The President of the Rural Syndicate of Sinop in northern Mato Grosso estimates that the safrinha corn yield in the municipality will be down 20-30% due to adverse weather. Instead of the usual 100 to 110 sacks per hectare (95.4 to 105.8 bu/ac), he is expecting yields in the range of 75 to 80 sacks per hectare (71.5 to 76.3 bu/ac).

The later planted corn ran into a series of weather and pest problems during the growing season. After being planted as much as a month later than normal, heavy rains shortly after planting washed away some of the newly applied nitrogen fertilizer. After that period of heavy rains, the remainder of the growing season was relatively dry, and the summer rains ended earlier than normal. Additionally, some farmers in the region reported an infestation of corn leafhoppers, which ended up being hard to control.

Below is a graph from the Mato Grosso Institute of Agricultural Economics depicting the safrinha corn harvest progress in Mato Grosso. After a slow start, the harvest pace is now starting to accelerate. 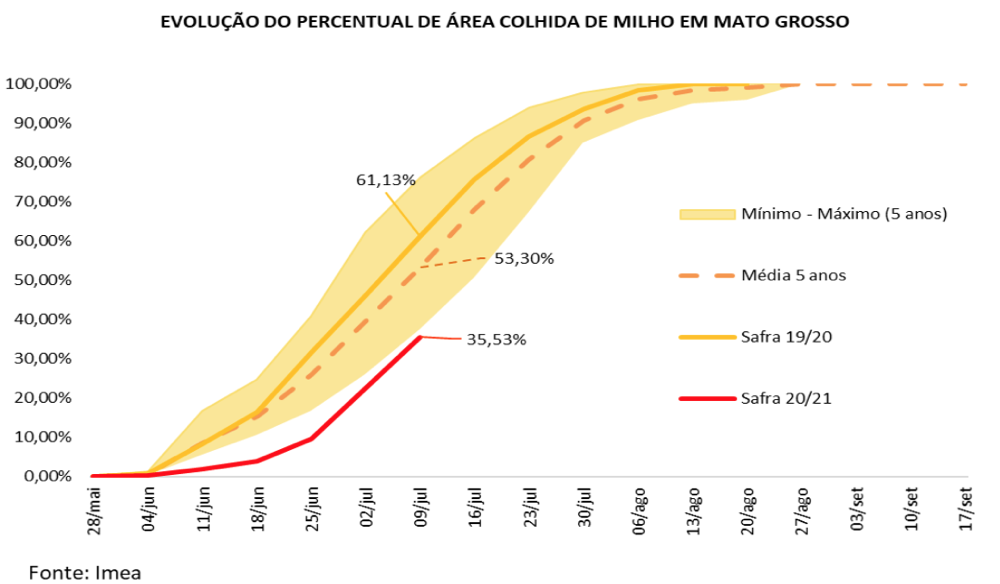 Parana Safrinha Corn - The condition of the safrinha corn crop in the state of Parana deteriorated after a series of frosts last week swept across southern Brazil. The coldest air in 20 years dropped temperatures in western Parana into the upper 20's &#176F resulting in three consecutive nights of frosts. Parana is the second largest safrinha corn producing state in Brazil after Mato Grosso.</p> <p>The Department of Rural Economics (Deral) rates the corn in Parana as 42% in poor condition, 46% average, and 12% good. The prior week the corn was rated 33% poor, 41% average, and 26% good. The safrinha corn in Parana was 6% pollinating, 61% filling grain, and 33% mature as of earlier last week. The corn is 3% harvested, which is up only 1% from last week. Deral estimates that as much as 70% of the safrinha corn in the state was in a sensitive stage of development when the frosts occurred.</p> <p>Local authorities indicated that the total extent of the damages from the frosts will not be known until the corn is harvested. In addition to much lower yields, the quality of some of the grain is expected to be poor as well.</p> <p>With less corn available for the livestock producers in southern Brazil, local corn prices have surged higher as end-user try to lock in available supplies. In western Parana, corn prices are in the range of R$ 95.00 per sack (approximately $8.50 per bushel).</p> <p><b>Mato Grosso do Sul Safrinha Corn</b> - The combination of drought and frosts have taken a heavy toll on the safrinha corn in Mato Grosso do Sul. According to estimates from the Soybean & Corn Producers Association of Mato Grosso do Sul (Aprosoja/MS), the state was expected to produce 8.2 million tons of corn, but that has now been reduced to 6.2 million. The average corn yield in the state is now expected to be in the range of 52.3 sacks per hectare (49.9 bu/ac). The corn in Mato Grosso do Sul is rated 61% poor, 38% average, and 1% good.</p> <p>The average price of corn during June in Mato Grosso do Sul was R$ 84.38 per sack (approximately $7.50 per bushel). This is 119% higher than June of 2020 when the price averaged R$ 38.48 per sack (approximately $3.45 per bushel).</p> <p><b>Goias Safrinha Corn</b> - According to the Director of the Rural Syndicate of Mineiros in southwestern Goias, the safrinha corn harvest is 5% and producers are expecting yield losses as high as of 40% for their earlier planted corn due to the dry weather. Two weeks ago, they experienced a frost, which is rare in the region, and a few of the later planted fields may see losses as high as 80%. Spot corn prices in Goias have increased to a range of R$ 73.00 per sack (approximately $6.50 per bushel) due to anticipated losses from the recent frosts.</p> </div> <div class="container-fluid" id="footer"> <h6>Copyright Soybean and Corn Advisor, Inc. 2009-2022</h6> </div> </body> </html>