The 2020/21 Brazil corn estimate was lowered 2.0 million tons this week to 86.0 million and I have a neutral to lower bias going forward. The drought and frosts took a heavy toll on the corn and now the quality of the corn from Parana and Mato Grosso do Sul is going to be very bad. It is uncertain if farmers will be able to sell some of the poorest quality corn.

The safrinha corn was 39% harvested late last week compared to 53% last year according to AgRural. This represents an advance of 9% for the week. The harvest in Mato Grosso (72.7%) propelled the national percentage. The harvest in Parana and Mato Grosso is slow due to wet weather and high grain moisture. There are going to be a lot of quality problems in Parana and Mato Grosso do Sul because the some of the corn was frosted while it was still filling grain. There may be similar quality problems in Goias, Sao Paulo, and Minas Gerais.

The safrinha corn in Brazil was hit by three days of freezing temperatures last week. This was the second wave of freezing temperatures in southern Brazil in three weeks. In some areas the most recent frosts were even more harsh than those three weeks ago. More frosts are forecasted for southern Brazil this week and these frosts may be the worst of all.

If you look at the safrinha crop in general, yield losses range from 15% to 75% with very little of the corn attaining trend line yields. In south-central Brazil, yield losses continue to mount with the best fields yielding 30-40-50% less than normal. In the hardest hit fields, losses are in the range of 60-100%. Some of the corn that escaped the first series of frosts, were killed by the second series of frosts last week and more frosts are forecasted for this week.

JBS Importing 30 Vessels of Corn from Argentina - The world's largest meatpacker JBS has already purchased 30 vessels of corn from Argentina with maybe more to come. The price of Argentine corn was 15 to 20 reals per sack cheaper ($1.30 to $1.75 per bushel) than the local prices in southern Brazil. Outside purchases already represent 25% of the corn they are using for feed, with volumes surpassing one million tons.

Corn prices for September on the B3 Exchange in Sao Paulo reached R$ 101.40 on Monday (approximately $9.03 per bushel). Brazil could end up importing as much as 4 million tons of corn in 2021.

Conab Monitoring Frost Damage - Conab is running a special series of reports monitoring the impact of the frost on crops in south-central Brazil. Below are two pictures of the same corn field in Cambe in northern Parana taken by technicians from Conab of a corn field before the frost (Antes da Geada) and after the frost (Depois da Geada). Since those pictures were taken, there have been two more episodes of frosts in southern Brazil. 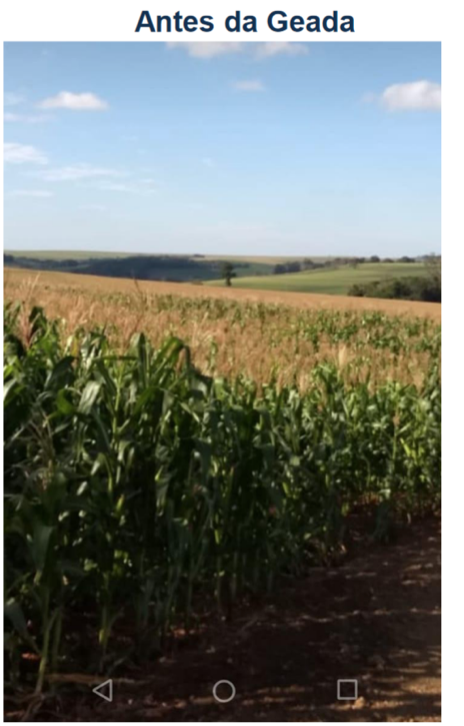 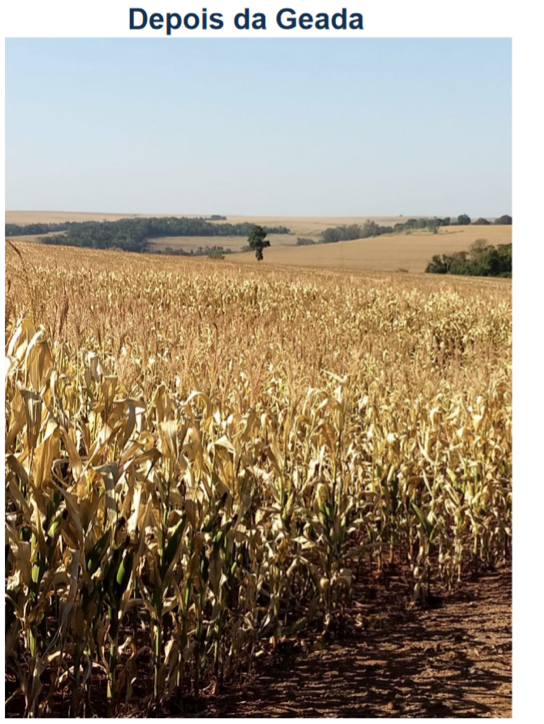 Corn yields continue to be highly variable in Mato Grosso and the final statewide yield might be down 15% from initial estimates.

Parana Safrinha Corn - In the municipality of Pato Branco in southwestern Parana, yield losses are expected to be in the range of 50% according to the President of the Rural Union of Pato Branco. The corn was planted late, and farmers had low expectations for the corn due to the drought with yields in the range of 80 sacks per hectare (76.3 bu/ac). The yield estimates have now declined to about 40 sacks per hectare after the frosts (38 bu/ac).

As of today, the safrinha corn in Parana is 15-20% harvested. The Department of Rural Economics (Deral) indicated earlier last week that 4% of the safrinha corn was pollinating, 37% was filling grain, 59% was mature. The corn was rated 46% poor, 44% average, and 10% good. Farmers are reporting very slow dry down of the corn and high grain moisture which could lead to quality problems.

Mato Grosso do Sul Safrinha Corn - The safrinha corn harvest should start in the municipality of Maracaju in southern Mato Grosso do Sul this week. The safrinha corn has had problems from the start with late planting, a drought, and then early frosts. Yields that are usually in the range of 90 to 100 sacks per hectare (86 to 5 bu/ac) are now in the range of 52 sacks per hectare (50 bu/ac). The latest planted corn has been impacted the most.

Farmers who may not be able to meet their contracts to deliver corn might opt to plant full-season corn instead of soybeans in the next few months in order to fulfill their contracts.