The safrinha corn was 90% planted as of late last week compared to 96% last year according to AgRural. Dryer weather allowed for a rapid planting pace last week and this represented an advance of 16% for the week.

Even though the ideal planting window for safrinha corn closed weeks ago in most locations, farmers are still planning on planting their safrinha corn until about the end of March, due to the very strong corn prices. In fact, last week on the Sao Paulo B3 exchange, corn for May reached as high as R$ 96 per sack (approximately $7.90 per bushel). Corn prices are not that high out in the interior, but farmers got the message. They might only get half of a corn crop because it is being planted so late, but they could still make money at these prices.

The eventual safrinha corn yields will be determined by two things, when the summer rainy season ends and if there are frosts in Parana and Mato Grosso do Sul before the corn matures. Long range forecast can change of course, but for what it is worth, some meteorologists are forecasting hotter than normal and dryer than normal weather in central Brazil for the next 30-45 days. If that forecast verifies, and we get to the second half of April with limited rainfall, the chances of significant rainfall after that is very limited.

For the corn in the two southern states of Parana and southern Mato Grosso do Sul, the biggest threat are frosts before the corn has a chance to mature. Some of these same meteorologists are also forecasting colder than normal conditions in these areas with the possibility of stronger than normal cold fronts moving in from Argentina. The safrinha corn in Parana for example is being planted about a month later than normal, so the risk of frost is higher than normal this year.

As you can see on the graph below, the Mato Grosso Institute of Agricultural Economics (Imea) indicated that the planting is essentially complete, but you never know if all the intended corn has been planted or if they assumed that farmers have already planted all the corn they are going to plant. 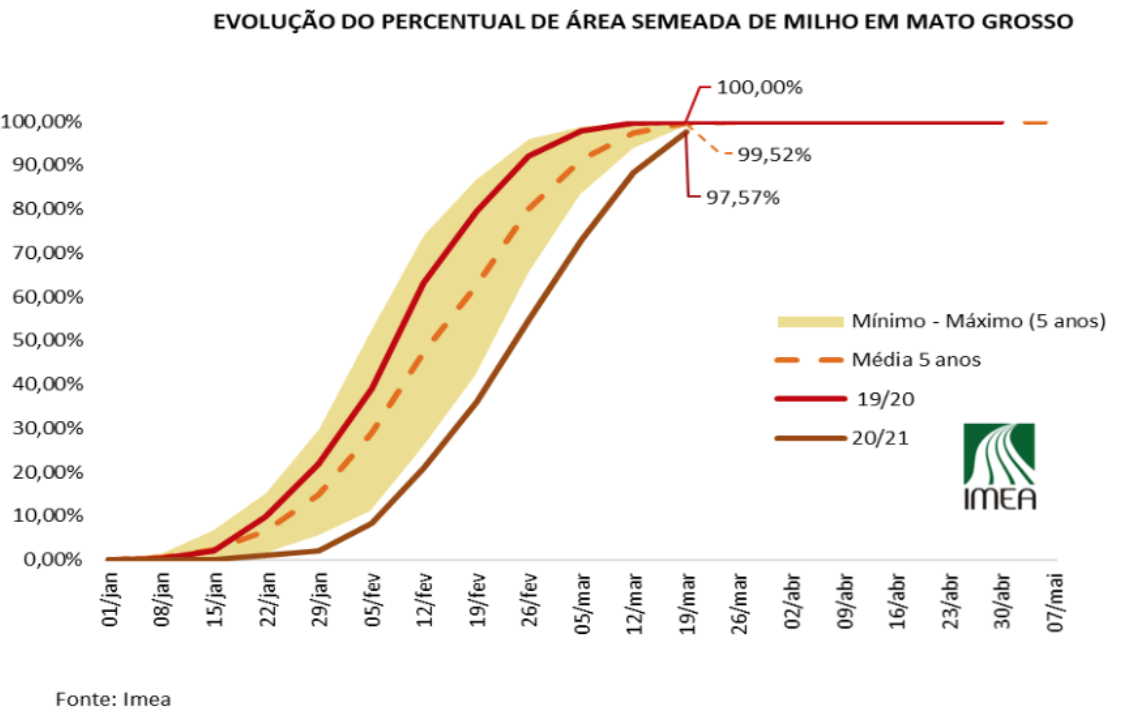 Goias Corn - The soybean harvest in the central Brazilian state of Goias continues to be delayed due to wet weather and as a result, the safrinha corn planting has also been delayed. Farmers in Goias have planted 50% of their intended safrinha corn compared to 70% average according to the weekly bulletin from the Institute for Stronger Agriculture and Livestock in Goias (Ifag).

The safrinha corn planting is now the most delayed since Ifag has been keeping records. Only 30% of the corn was planted during the ideal planting window which closed at the end of February. Farmers are expected to keep planting their safrinha corn until the end of March due to the strong domestic corn prices and Ifag is expecting an increase of 1.4% in the safrinha corn acreage.

Farmers are not actively forward contracting much corn because they have been focused on harvesting and marketing their soybeans. Additionally, end users have not been active in the market waiting for lower prices.