In their April Crop Report, Conab increased the Brazilian corn estimate by 0.9 million tons to 108.96 million (see later article), but dryer than normal conditions in south-central Brazil may put that estimate at risk.

A lack of rainfall in south-central Brazil has farmers very concerned about their safrinha corn production. The concerns are mainly in the states of Parana, Mato Grosso do Sul, Goias, and Sao Paulo. These four states combined are expected to produce approximately 45% of Brazil's safrinha corn (see table). The forecast is calling for the possibility of some light and scattered rains later this week, but they probably will not be heavy enough to reverse the overall dryer trend.

If the forecasted rains disappoint later this week, there is a strong possibility that the Brazilian corn estimate may be lowered in next week's report.

According to Paulo Scntelhas of the company Agrymet, this growing season started out problematic with dryer than normal conditions last September-October-November that delayed the soybeans planting. The soybean harvest was delayed even more due to heavy rains, which in turn, delayed the planting of the safrinha corn. 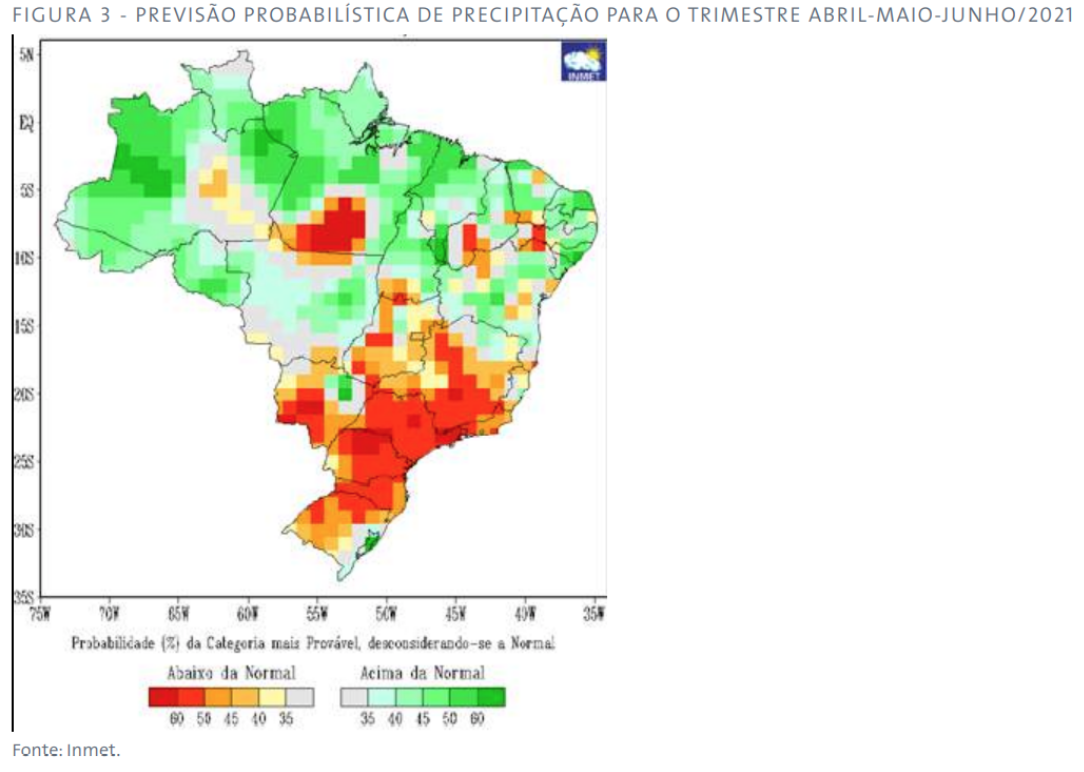 I would currently estimate that 40-45% of the safrinha corn is experiencing some level of moisture stress especially in areas of sandier soils or areas that have received less rainfall. The main concern is south-central Brazil, but there is also a concern in southeastern Mato Grosso as well.

The safrinha corn is 100% planted and the development of the corn ranges from pollination to just germinating/emerging. The most advanced corn development is probably in western Mato Grosso where the earliest planted corn is starting to pollinate. The slowest developing corn is in western Parana and southern Mato Grosso do Sul where some of the latest planted corn is just emerging.

Parana Safrinha Corn- The safrinha corn in Parana was 99% planted as of earlier last week according to the Department of Rural Economics (Deral). The corn is 87% in vegetative development, 4% pollinating, and 1% filling grain. The corn is rated 1% poor, 7% average, and 92% good. Many farmers in western Parana have indicated that their corn is in desperate need of rain.

Goias Safrinha corn - The safrinha corn planting is essentially complete in Goias and the harvest of the full-season corn is nearly complete as well. The price of corn last week in Goias averaged R$ 78.27 per sack (approximately $6.45 per bushel).

In the municipality of Mineiros, which is located in southwestern Goias, the safrinha corn was planted very late, but the crop has been developing normally thus far. The corn yields could still be normal if the crop continues to receive rainfall until late May or early June.

Mato Grosso do Sul Safrinha Corn - In the municipality of Laguna Caarapo, which is located in southern Mato Grosso do Sul, the safrinha corn is in various stages of moisture stress depending on when it was planted. The earliest planted corn is in pre-pollination and suffering the most from the dry weather. If the corn does not receive rain soon, losses could be over 50%.

In addition to dry conditions, farmers in Mato Grosso do Sul are concerned about increased pest pressures especially from corn leafhoppers (Dalbulus maidis) which have been a particular problem in south-central Brazil this growing season. Corn leafhoppers can transmit the MRFV virus which can cause stunting and premature wilting of corn plants resulting in significant yield losses. It was already a concern for the full-season corn and now it's a concern for the safrinha corn. Below is a breakdown of the safrinha corn acreage and yield reported by Conab in last week's April Crop Report.