At this writing, the coldest air of the season will move into southern Brazil Monday night and into Tuesday and Wednesday with the potential for frost/freeze and maybe even some snow in the higher elevations. The coldest temperatures may occur Tuesday night/Wednesday morning and there may also be several nights in a row with freezing temperatures. Brazil is experiencing the longest nights of the year right now, which allows for even more cooling.

If a frost/freeze does occur in western and northern Parana and southern Mato Grosso do Sul, it could cause additional damage to the safrinha corn. As of earlier last week, the safrinha corn in Parana was 14% pollinating and 61% filling grain. Approximately 30% of the corn in Parana and Mato Grosso do Sul could be susceptible to additional losses if the frost/freeze forecast verifies.

The safrinha corn in Brazil is approximately 5-7% harvested compared to 15% last year at this time. Early reports continue to show a lot of variability in yields. The first harvested corn is expected to be the best yielding because it was planted the earliest. 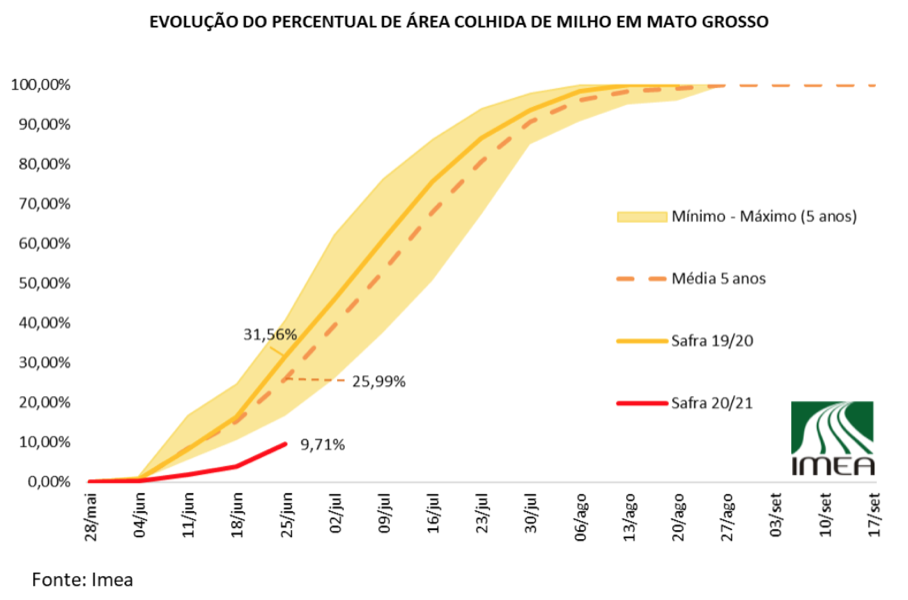 According to the President of the Rural Syndicate of Maringa, the average corn loss in the region will be 50% to 60% and in the areas with the least rainfall, the losses could be 80% to 100%.

The safrinha corn harvest will start in mid-July so there is still the potential for additional losses if a frost occurs within the next few weeks.

Some of the farmers who forward contracted their anticipated corn production are going to have problems harvesting enough corn to meet their contracts. This will force them to renegotiate their contracts with the grain companies.

The Department of Rural Economics (Deral) reported that 24% of the safrinha corn in Parana is mature and that 1% had been harvested. Deral lowered their estimate for the 2020/21 safrinha crop by 500,000 tons to 9.8 million tons. Their current estimate is 4.9 million tons lower than their original estimate. Parana is the second largest safrinha corn producing state in Brazil after Mato Grosso

Agroconsult's Harvest Rally - After the completion of their annual crop tour which is called the Harvest Rally (Rally da Safra), Agroconsult lowered their estimate of the 2020/21 Brazilian corn estimate to x million tons. They lowered their estimate of the safrinha corn production to 65.3 million tons, which was down 900,000 tons from their prior estimate and down 22% from their January estimate.