There is a very unusual situation developing in Brazil. Brazil exported too many soybeans earlier this year due to the devaluation of the Brazilian currency and strong demand from China. That has resulted in very tight domestic supplies and the need to import soybeans.

Between January and October, Brazil imported 625,000 tons of soybeans with 589,000 tons from Paraguay and 36,300 tons from Uruguay. This is the most soybeans imported since 2003. Importers are trying to bring in more desperately needed soybeans from Paraguay, but they are running into an unusual logistical problem.

The water level in the Parana River, which forms the border between Brazil and Paraguay, is very low and as a result, barge traffic was suspended two weeks ago. Without barges to move soybeans from Paraguay to Brazil, importers had to switch to land transportation and as a result, late last week there were over 600 trucks loaded with Paraguayan soybeans and corn waiting to cross into Mato Grosso do Sul from Paraguay at the city of Mundo Novo (see map below).

This is a very little used crossing point and the problem is that the customs office at that location is very small with only one custom official. In "normal" times it takes about a day for a truck carrying soybeans or corn to be inspected and cleared for entry into Brazil. These are not "normal" times of course and now there are over 600 trucks waiting to cross the border with some of the truckers have been waiting at that crossing point for over 15 days and counting.

The importers are pleading with the government to send emergency personnel to the Mundo Novo customs office to assist the lone official. If more officials are not sent to the office, it could take up to a month to process all the trucks.

To complicate the situation even more, it is now very hot and rainy at that location and the condition of the soybeans could start to deteoirate because the trucks are covered by tarpaulins, which are not completely impervious to water. Additionally, there are very limited services available for the truckers at that location as far as lodging and food, etc. Importers are concerned that if the situation is not resolved very soon, they may not be able to fulfill their contracts. Additionally, truck transportation costs have increased 200% in the last two months.

If the situation is not resolved soon, it is expected that some truckers may leave the line and search for other points to cross into Brazil, driving up transportation costs even further. Meanwhile, poultry and hog producers are desperate for corn and soybean meal for their livestock operations.

The red dot on the map below is the city of Mondo Novo, which is where the states of Mato Grosso do Sul, the state of Parana, and Paraguay meet. If the trucks cannot cross into Brazil at Mundo Novo, they would have to drive south to cross at Foz do Iguacu because in between Mundo Novo and Foz do Iguacu, is the Itaipu Dam Reservoir and there is no way to get across that enormous reservoir.

Personal note - I have been to Mundo Novo (it means New World) many times because it is the most direct route from Mato Grosso to the states of Parana and Rio Grande do Sul. Today there is a bridge across the Parana River between Mato Grosso do Sul and Parana but prior to the bridge, you crossed on a ferry boat and the river is so wide that the trip took about 45 minutes. Usually there were only one or two cars along with two or three semi-trucks carrying grain. 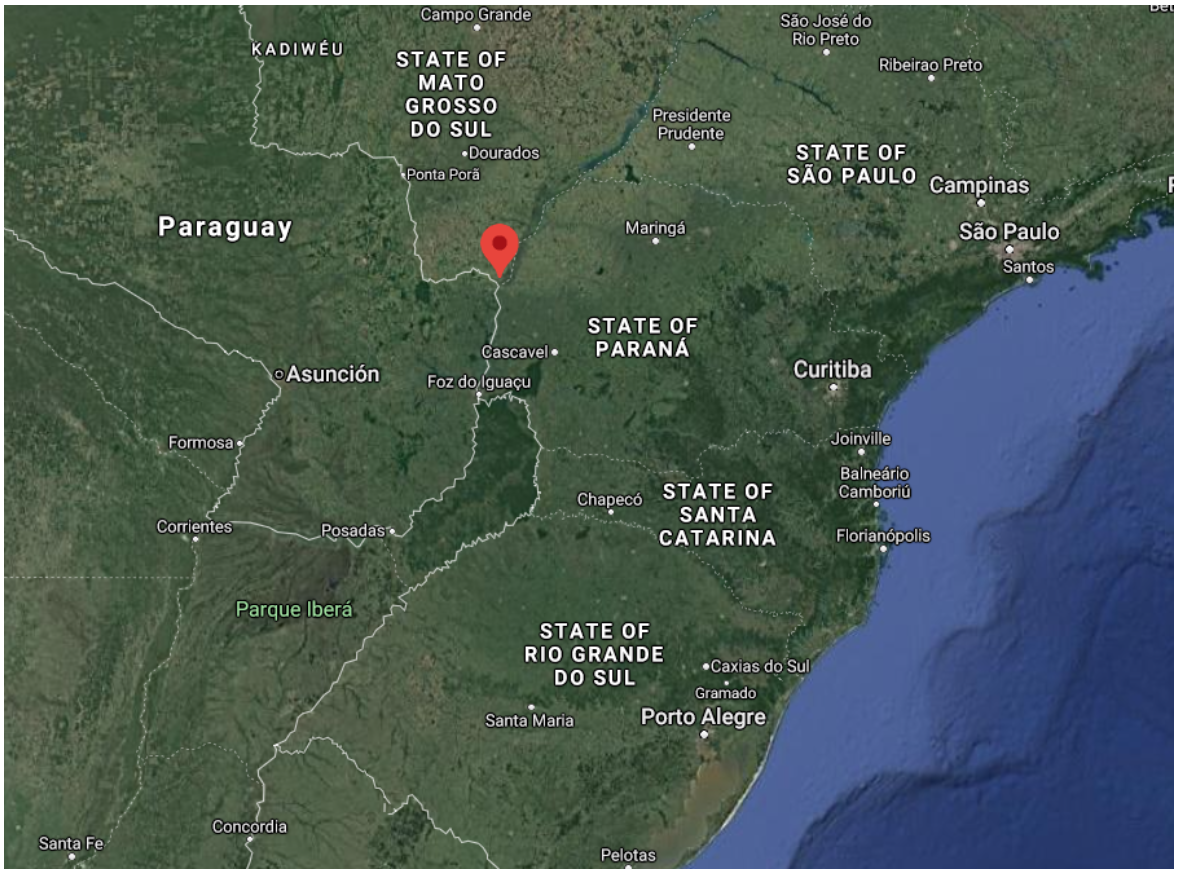