Rainfall over the last several weeks has probably been enough to stabilize the corn crop in Argentina. In fact, there has been some localized flooding in areas with the heaviest rainfall. It was dry over the weekend, but the forecast is calling for more rainfall later this week across most of the production areas. They still need more rainfall in northern Argentina and there were some low temperatures last week across some of the southern areas with maybe some patches of light frost.

The Argentina corn estimate was left unchanged this week at 45.5 million tons with the main remaining threats to the crop being a return of a prolonged period of dry weather and potential frost damage.

Rains last week slowed the early corn harvest and kept some of the mature corn at high moisture, but they were beneficial for the later developing corn that is still filling grain. Most of the early harvest has occurred in the central and eastern areas where the early corn yields remain below initial expectations. The average nationwide corn yield thus far is 7,440 kg/ha (118.2 bu/ac) with a range of 5,000 to 8,500 kg/ha (79.5 to 135.1 bu/ac).

The corn in Argentina was rated 19% poor/very poor, 54% fair, and 27% good/excellent as of the middle of last week according to the Buenos Aires Grain Exchange. The good/excellent percentage compares to 26% last week and 32% last year. The soil moisture for the corn was rated 24% short/very short, 75% favorable/optimum, and 1% surplus. Last week was the first surplus rating in recent months. The favorable/optimum percentage was 71% last week.

Below is a graphic from the Buenos Aires Grain Exchange show the "National Corn Harvest Progress." The tan area is the maximum and minimum harvest range and the black line is the harvest progress for 2020/21. The growing season for corn is very stretched out in Argentina with planting from September to January and harvesting from February to September. The corn harvest in Argentina usually reaches 50% sometime about mid-May. 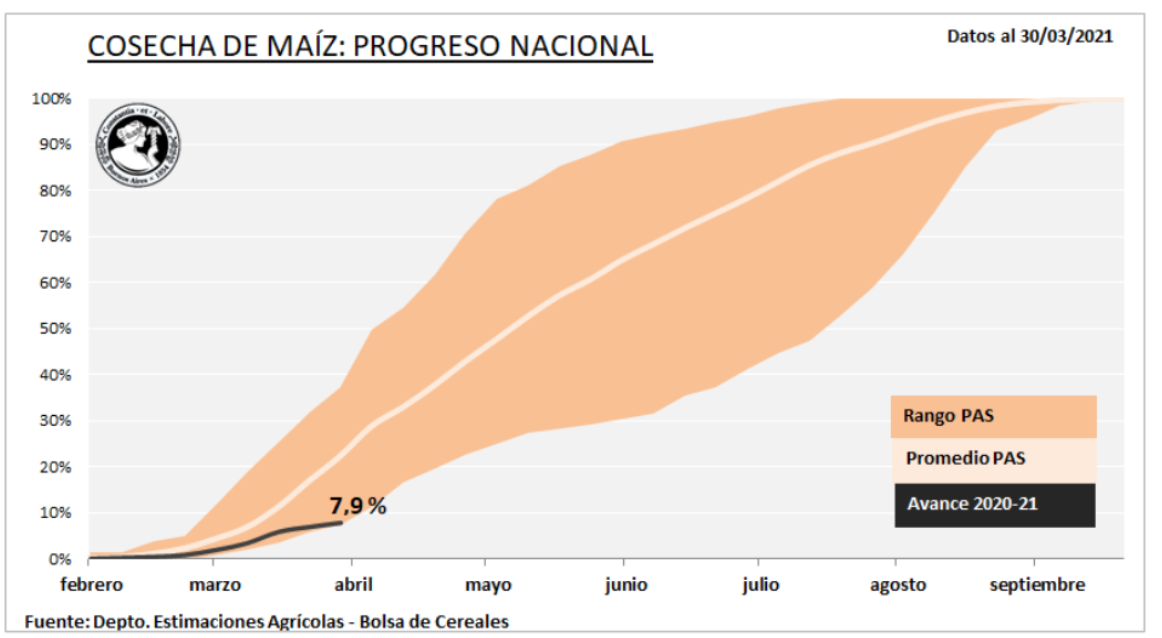