The forecast is calling for some rain in the safrinha corn areas over the next 1-2 weeks, but it does not look like there will be enough rain to stop the overall deterioration of the crop. If the rains end up being disappointing, the corn estimate will probably continue to decline.

Most of the safrinha corn in Brazil had another dry week last week. The only area that received rain was basically the state of Parana, but even there, the rainfall only offered a temporary reprieve from the dry conditions. The forecast is calling for chances of rain later this week and again next week although the amounts are only expected to result in a temporary reprieve from the dry conditions.

The weather in central Brazil has also turned much dryer in recent weeks especially in southern and eastern Mato Grosso. This has led the Mato Grosso Institute of Agricultural Economics (Imea) to trim the statewide corn yield estimates and yields are expected to continue moving lower. In their May Crop Report, Conab left their estimate of the safrinha corn production in Mato Grosso unchanged from April at 36.15 million tons.

Mato Grosso Safrinha Corn - The consulting firm TempoCampo is forecasting that the state of Mato Grosso will receive less than 50 mm of precipitation (2 inches) during the month of May, which will not be enough to overcome the current soil moisture deficit. The soil moisture in the southeastern, south-central, and mid-north regions of Mato Grosso might fall to as low as 11% of capacity by mid-May.

The company Geosys Brasil indicated that the driest region of the state is the southeastern quadrant where the soil moisture has been below average since mid-March. The region received light rain during the first two days of May, but no additional significant rain is expected until maybe next week. The best weather has been across the northern sections of the state, but even there, the soil moisture has been declining during the month of April and there is only limited rainfall forecasted for May.

Farmer Sales of Safrinha Corn in Mato Grosso - Farmers in Mato Grosso have sold 73.8% of their anticipated 2020/21 safrinha corn production, which is an increase of only 1.7% from the prior month. Farmers are hesitant to sell more corn because they are uncertain about their final production. Corn prices in April increased 12% to a statewide average of R$ 67.50 per sack (approximately $5.70 per bushel).

Parana Safrinha Corn - The state of Parana received some light showers last week with heavier amounts in the eastern part of the state and lighter amounts in the western part of the state where most of the safrinha corn is produced. The safrinha corn areas generally received less than an inch of precipitation. The rainfall will only be a temporary reprieve to the very dry conditions.

The Department of Rural Economics (Deral) reported earlier last week that some farmers in the state of Parana have already opted for insurance payments for their safrinha corn. In some areas of the state, the corn did not receive any precipitation since it emerged until last week, and in the worst case scenario, the corn could be a complete loss.

The safrinha corn in Parana was rated 92% good on April 6th. In many areas, it had not rained for more than 40 days until last week.

In the municipality of Pato Branco, which is located in southwestern Parana, the weather during April was the worst in 40 years. The region received some limited rainfall last week, which saved the crop from even lower yields. Farmers in the municipality are expecting corn yields in the range of 50 sacks per hectare (44.7 bu/ac).

Mato Grosso do Sul Safrinha Corn - The problem for the safrinha corn in the state has been the lack of generalized rains for at least 40 days. Some of the corn was planted in the dust in early April and only emerged a month later when it received a rain. The crop has had increased pest and disease pressure, but farmers are hesitant to invest more money in a crop that is going to be disappointing.

Goias Safrinha Corn - Light and scattered rains continue to negatively impact the development of the safrinha corn. The corn is approximately 40% in pre-pollination, 40% pollinating, and 20% filling grain. The late planting and lack of rainfall have farmers reluctant to invest in additional pest and disease control measures as well as fertilizer applications.

Minas Gerais Safrinha Corn - The condition of the safrinha corn in the state of Minas Gerais is declining day by day without rain. The President of the Soybean & Corn Producers Association of Minas Gerais (Aprosoja-MG) indicated the corn that was planted earlier suffered the most since it has been pollinating and setting ears under adverse conditions. The later planted corn is still in vegetative development, but without additional rainfall, it will suffer losses as well. One the positive side, farmers in the state increased their safrinha corn acreage by 33% to 600,500 hectares.

The table below is Conab's May estimate for Brazil's 2020/21 safrinha corn production.

The Brazilian National Weather Service (Inmet) is forecasting dryer than normal weather for May-June-July for central and south-central Brazil, which would encompass the majority of the safrinha corn acreage. Below is Inmet's precipitation forecast for May-June-July. 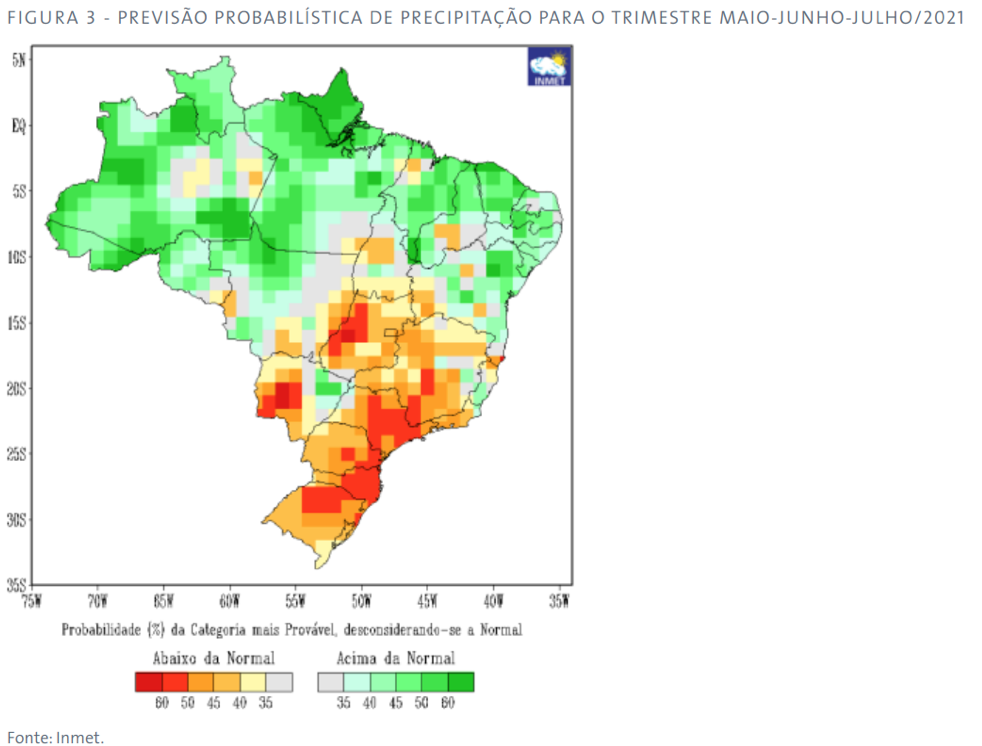