The 2020/21 Brazil soybean crop was 9% harvested late last week compared to 24% last year and 20% average according to AgRural. The harvest pace picked up a little last week, but it was still slow due to wet weather and this represents an advance of about 5% for the week. There will be some more harvest activity in south-central Brazil this week where the weather is forecasted to be dryer, but the harvest pace will remain slow in the more northern locations due to persistent heavy rains. The forecast is calling for a lot of rain in northern Brazil during the second half of February.

The main concern now is the persistent wet weather as harvest gets underway. The forecast is calling for a lot of rain in the central and northern areas as more of the soybeans reach harvest maturity. There are concerns that the wet weather could result in poorer quality seed and lower yields than anticipated. There have been problems reported especially in the state of Parana and the situation is ongoing, so we don't have the final answer.

Mato Grosso - Farmers in Mato Grosso had harvested 22.2% of their soybeans late last week compared to 58.2% last year and 45.4% average according to the Mato Grosso Institute of Agricultural Economics (Imea). The most advanced harvest is in the northern part of the state where 35% of the soybeans have been harvested. The slowest harvest pace is in the south-central region where 12% of the soybeans have been harvested. This represents an advance of 11% for the week and the harvest is now 35% behind last year's pace. 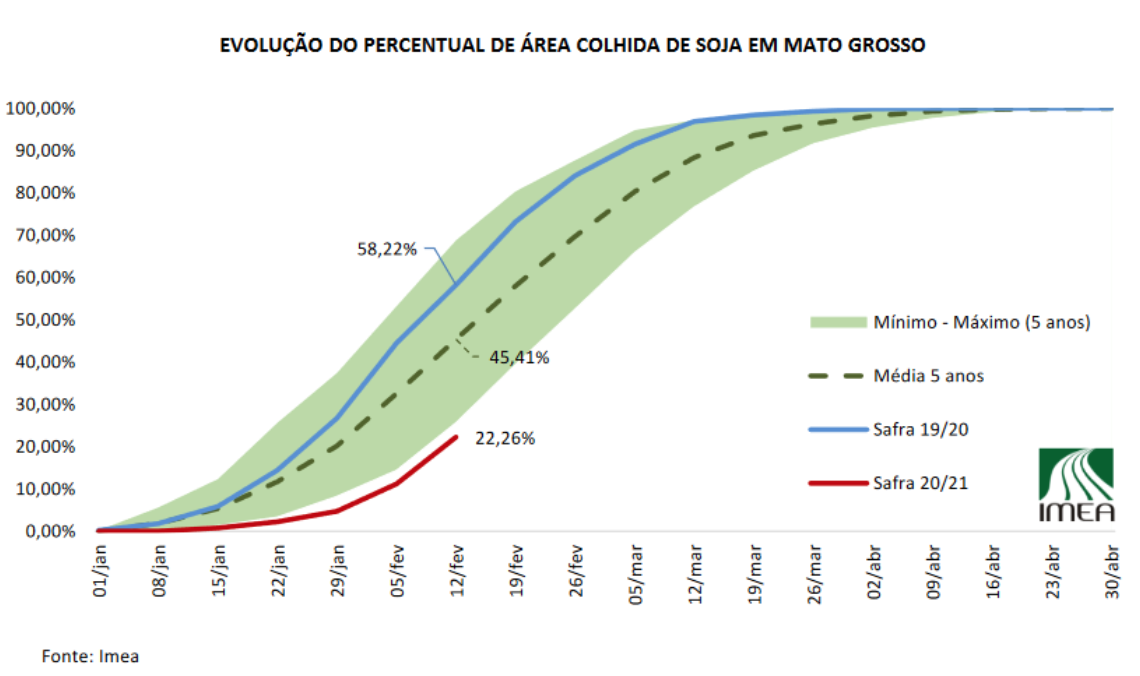 Soybean yields in Mato Grosso continue to be variable with the lowest yields coming from the early planted soybeans that were impacted by dry weather during pod filling (see later article). Soybean yields in the state will improve once the harvest moves into the later planted soybeans that had ample moisture during pod filling.

Parana Soybeans - The 2020/21 soybean crop in Parana was 13% flowering, 67% filling grain, 19% mature, and 1% harvested earlier last week according to the Department of Rural Economics (Deral). The soybeans were rated 5% poor, 19% average, and 76% good. The percentage of the crop rated good was down 1% from the prior week. By the end of last week, the soybean harvest in Parana was 3.5% compared to 26% average according to Patria Agronegocios.

Some farmers in Parana have reported that pod abortion has occurred in some of their soybeans. Scientists are attributing this to prolonged periods of heavy overcast and a lack of direct sunlight during much of January. As a result, the soybeans put on excessive vegetative growth and aborted some of the pods. The extent of the problem is unknown, but where it has happened, it has resulted in very significant yield losses.

Goias Soybeans - Farmers in Goias have harvested approximately 10% of their 2020/21 soybeans and the harvest will continue for another 30-50 days. The early yields are not as good as last year, but they are better than what had been expected given the dry start to the growing season. Soybean yields in the state are expected to be in the range of 60 to 61 sacks per hectare (53.6 to 54.5 bu/ac) compared to last year's yields of 62 to 63 sacks per hectare (55.4 to 56.3 bu/ac).

The lower yields are being attributed to a 15 to 20 day stretch of dry weather during November. The weather turned much wetter during December and January, which helped the crop recuperate most of its yield potential. Approximately 60% of the anticipated soybean production in Goias has already been sold for prices in the range of R$ 80 to R$ 100 per sack (approximately $6.85 to $8.60 per bushel). Current soybean prices are much higher, but at the time the soybeans were forward contracted, farmers were happy with the price.