The amount of poor quality seeds resulting from the wet weather is a big concern and it appears to be getting worse. We won't know the full extent of the problem until after all the soybeans are harvested. As a result, my soybean estimate may decline in future reports.

The Brazilian soybeans were 34% harvested as of late last week compared to 52% last year and 52% average according to the consulting firm Patria AgroNegocios. This represents an advance of 9% for the week, which is disappointing.

Continued wet weather in central and northern Brazil is resulting in a large amount of very poor quality soybeans. So poor in fact, that many local analysts are lowering their estimates for the 2020/21 Brazilian soybean crop. The seed quality situation is turning out to be worse than I expected.

Wet weather such as this usually occurs in January when fewer soybeans are mature and ready for harvest. The nearly constant wet weather during February hit at a very inopportune time when a lot of soybeans were mature and ready for harvest. As bad as this is for the soybeans, it could end up being worse for the safrinha corn, but more on that later.

The harvest in Mato Grosso is 15 to 20 days behind average due to the delayed planting and now wet weather at harvest. The hardest hit area in the state appears to be in the central part of the state along Highway BR-163. The Director of the Mato Grosso Soybean and Corn Producers Association (Aprosoja/MT) feels the statewide soybean yield will be below the 60 sacks per hectare (53.6 bu/ac) originally expected, but we won't know for sure until everything gets harvested and the poor quality soybeans are accounted for.

Additionally, there are reports of trucks waiting as long as five days to unload their high-moisture soybeans at local grain elevators. The wait is so long because a lot of the soybeans need to be dried and the grain elevators have limited drying capacity and the ability to blend the poor quality soybeans with better quality soybeans. The longer those high-moisture soybeans set in the truck without drying, the greater the possibility of further deterioration.

The municipalities of Sorriso and Lucas do Rio Verde, both of which are on BR-163, were particularly hard hit with double their normal rainfall during February. These two municipalities together plant about 2.1 million acres of soybeans and about 20-30% of the crop is left to harvest. 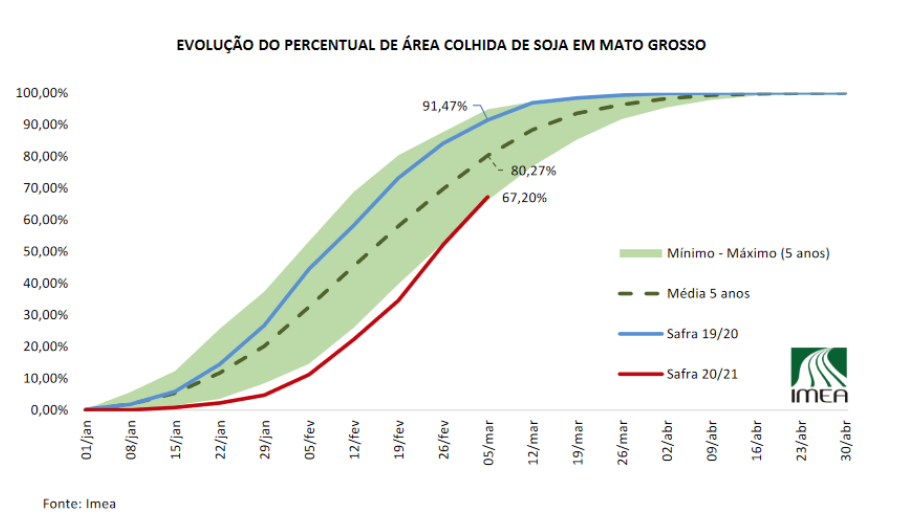 Parana Soybeans - The soybeans in Parana were 23% harvested earlier last week compared to approximately 42% a year earlier according to the Department of Rural Economics (Deral).

Rio Grande do Sul Soybeans - Some soybeans in Rio Grande do Sul had been 15-16 days without rain, but last week it rained 30-70 mm (1.2 to 2.8 inches), which helped to recuperate the crop. Soybean planting in the state was delayed due to dry weather in October and November, so the harvest will start about March 20th and the recent rains should insure the crop's yield potential.