The 2021/22 soybeans in Brazil were 4% planted as of late last week compared to 2% last year and 2% average according to AgRural. This represents an advance of 2.7% for the week. The fastest soybean planting pace is in Parana where the rainfall has been better, and they were allowed to start planting a little earlier than in Mato Grosso.

Brazilian farmers are planting their soybeans as quickly as possible anywhere there is adequate soil moisture. Even where the soil moisture is still short, I suspect a lot of farmers will "plant in the dust" in anticipation of forecasted rains.

Mato Grosso - The farmers in Mato Grosso have planted 6.1% of their 2021/22 soybeans compared to 1.7% last year and 3.3% average. This represents an advance of 4.9% for the week. The fastest planting pace is in the western part of the state where 8.7% of the soybeans have been planted.

Municipality of Sinop - In the municipality of Sinop in northern Mato Grosso, the summer rains are arriving sooner than they did last year and the early soybean planting conditions are better than last year. If the weather conditions remain favorable for the rest of the growing season, soybean yields in the municipality are expected to be in the range of 60 sacks per hectare (53.6 bu/ac) with the best yields may be as high as 75 to 80 sacks per hectare (67 to 71.5 bu/ac).

Parana - Farmers in Parana had planted 7% of their 2021/22 soybeans as of earlier last week according to the Department of Rural Economics (Deral). The main area of planting has been in the southwestern corner of the state. The soybeans are 77% germinating and 23% in vegetative development. The soybeans are rated 0% average and 100% good.

The state of Parana received good rains over the weekend in the range of 2-4 inches, which should now allow for all the farmers to start planting their 2021/22 soybeans. 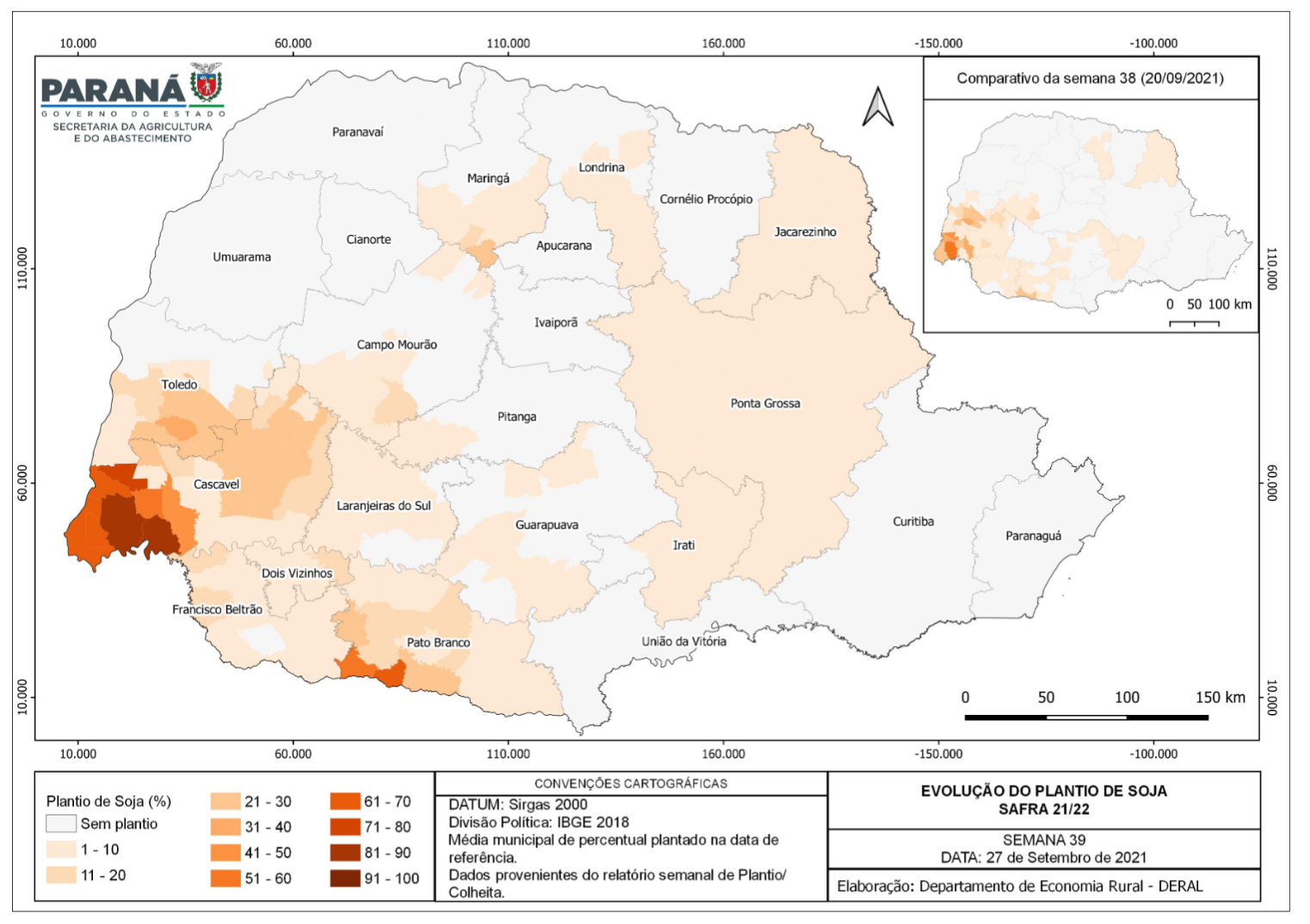 Rio Grande do Sul - The early soybean planting is getting underway in the state and farmers are worried about the increased cost of production and the late delivery of some inputs such as fertilizers, machinery, and parts.

Mato Grosso do Sul - Soybean planting has started in southern Mato Grosso do Sul where they received some weekend rains. Conditions are still too dry in the northern part of the state for planting although some farmers are "planting in the dust" in the anticipation of forecasted rain.

The president of Aprosoja-MS is anticipating that the soybean acreage in the state will increase 7% to 3.77 million hectares (9.31 million acres) with a production of 12.8 million tons. Even with the increase in acreage, the 2021/22 production may be less than 2020/21 due to lower yields. The 2020/21 statewide average soybean yield in the state set a record at 63 sacks per hectare (56.3 bu/ac), but this year, he is estimating the statewide soybeans yield at 56.4 sacks per hectare (50.4 bu/ac). Farmers in the state have forward contracted approximately 40% of their anticipated production, which is slower than last year.

Goias - With end of the Soybean-Free period on September 25th, farmers in the state of Goias in central Brazil are now starting to plant their 2021/22 soybeans in areas that received rain or if the farmers have irrigation.

The start of the summer rains has been uneven with higher amounts in the northern part of the state and lower amounts or none in southern Goias where the soybean production is concentrated. Areas of eastern Goias have some of the highest rates of center pivot irrigation in Brazil and farmers with that capability, are actively planting their soybeans.

According to the president of Aprosoja-GO, the soybean planting in Goias should accelerate after October 10th when the forecast is calling for more regular rainfall. He expects the soybean acreage in the state to increase 5% in 2021/22 to 3.9 million hectares (9.6 million acres) with a production as high as 14 million tons.

Last year, Goias was the fourth largest soybean producing state in Brazil after Mato Grosso, Parana, and Rio Grande do Sul. During the 2020/21 growing season, Goias produced 13.7 million tons which represented 10% of Brazil's soybean production. In 2020/21, farmers in the state planted 3.69 million hectares (9.1 million acres) with a yield of 3,715 kg/ha (55.3 bu/ac).

Minas Gerais - Farmers with irrigation are actively planting their 2021/22 soybeans while most farmers in the state are still waiting for improved soil moisture before they start planting. The president of Aprosoja-MG is anticipating that farmers in the state will increase their soybean acreage by 3-5%. Farmers have forward contracted less of their anticipated 2021/22 production compared to last year because they do not want to miss out on potential future price increases.