The Brazilian soybeans are 38% planted compared to 23% last year and 27% average according to AgRural. This represents an advance of 16% for the week and is the second fastest planting pace on record trailing only the 2018/19 growing season. The soil moisture is good enough to plant soybean nearly everywhere in Brazil, so the planting progress should continue to move ahead quickly.

Municipality of Sorriso - In the Municipality of Sorriso in central Mato Grosso, the soybeans are approximately 70% planted although the rains have been somewhat irregular during October with some areas not receiving rain for three weeks. If they receive good rains during November and December, the president of the Rural Union of Sorriso/MT expects soybean yields in the range of 60 sacks per hectare (53.6 bu/ac). He expects the safrinha corn planting to start in January.

Farmers in the municipality have forward contracted 40% of their anticipated soybean production compared to 60% last year. Farmers do not want to make the same mistake as last year when they sold too much of their crop too early and they missed much higher soybean prices after harvest. Many farmers have indicated they will hold off on any further sales until after the soybeans are harvested.

The president is also urging farmers to be cautious with their input purchases due to the soaring costs of fertilizers, chemicals, and machinery. He is advising farmers that they might make higher profits if they sacrifice some yield by spending less on expensive fertilizers. He also recommends that farmers think twice before making discretionary purchases such as machinery. 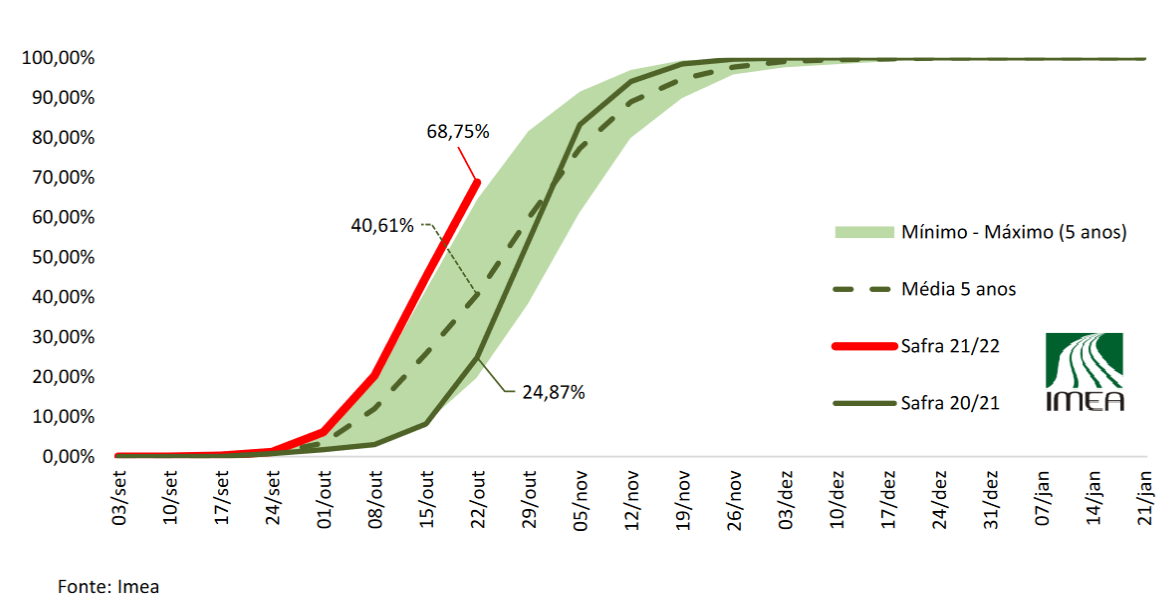 Parana - The farmers in Parana had planted 38% of the soybeans as of earlier last week and the soybeans are 50% germinating and 50% in vegetative development. The soybeans are rated 2% average and 98% in good condition. Wet conditions have slowed the planting in Parana which is now behind the average planting pace of 49% for this time of year.

In the municipality of Maringa in northern Parana, the rains arrived on September 30th and it has been quite wet since then. The soybean planting is 10-15 days later than normal due to the wet conditions, but it is still ahead of last year's planting pace which was delayed by dry weather. Germination is reported to be good and if the weather cooperates for the rest of the growing season, yields are expected to be in the range of 60 sacks per hectare (53.6 bu/ac) maybe even as high as 70 sacks per hectare (62.5 bu/ac). Farmers are reluctant to forward contract their anticipated soybean production for fear of missing out if prices move higher like they did last year.

In the municipality of Goioere in western Parana, they have received 16 inches of precipitation during October which has allowed farmers to plant only 50% of their soybeans. Planting in the municipality is about 20 days slower than optimum and some of the soybeans will have to be replanted due to poor germination and soil crusting. Farmers have purchased approximately 90% of the inputs needed for their safrinha corn which will be planted later than what farmers would like. Since the region is not suitable for winter wheat production, farmers will not hesitate to plant their safrinha corn later than desired.

Below is the soybean planting progress map from the Department of Rural Economics (Deral) for the state of Parana as of October 18th. The planting percentages are in the bottom left-hand corner and the prior week's progress map is in the upper right-hand corner. 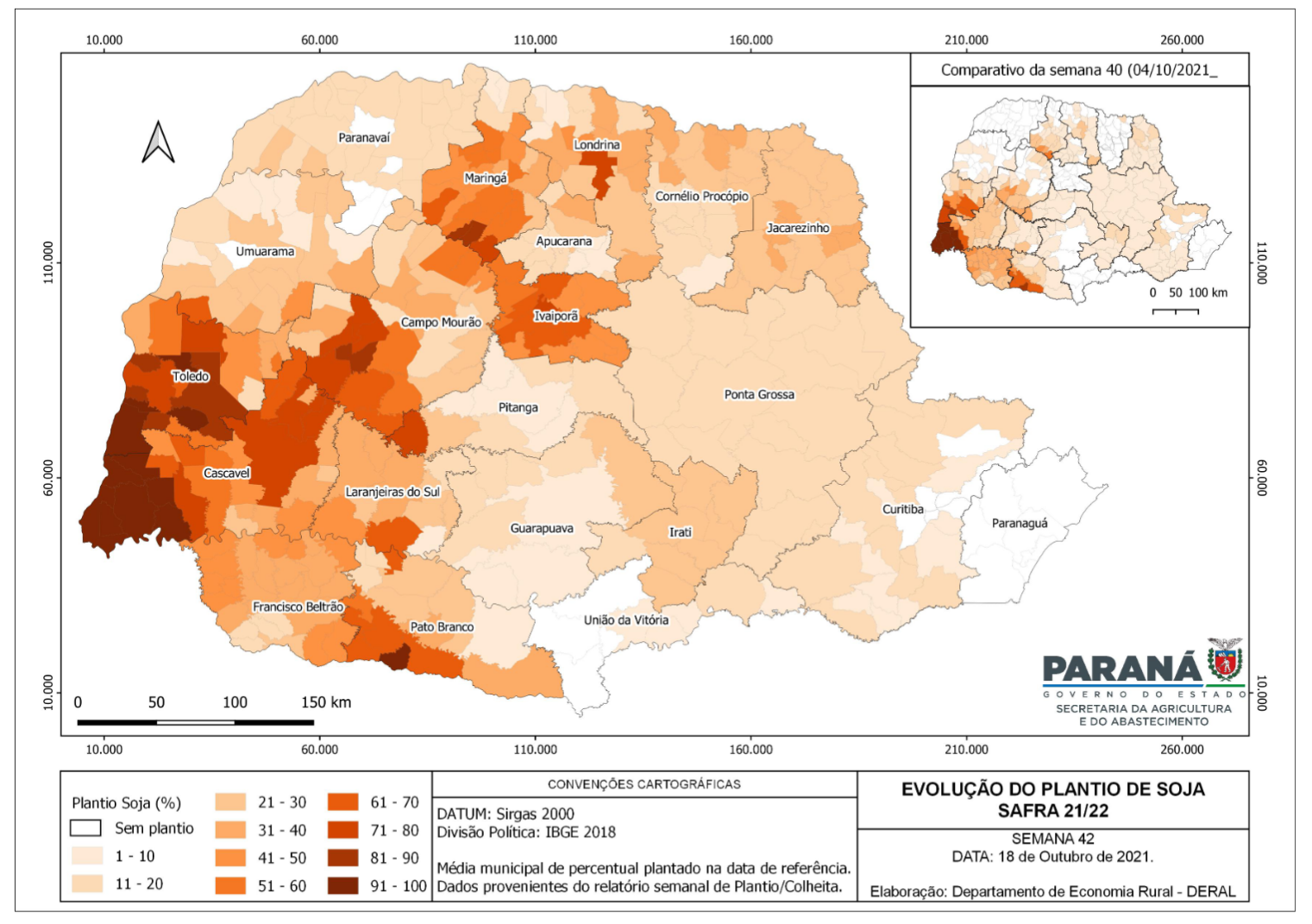 Parana wheat harvest - In spite of overcast and wet conditions over the last several weeks, farmers in the state had harvested 74% of their wheat as of earlier last week. The forecast for Parana is dryer for the second half of October and farmers are hoping for an increase in the harvest pace. The previous wet weather may result in lower test weights for the wheat and somewhat poorer quality. All the wheat in Parana will be followed by double crop soybeans.

Mato Grosso do Sul - Soybean planting in the state was 45% as of late last week compared to 34% average. In the municipality of Laguna Carapa in southern Mato Grosso do Sul, the weather during September was dry, but since the first of October, they have received 12 inches of precipitation. This has slowed the planting progress and resulted in some fields having to be replanted. Even with the delays, farmers are expecting good soybean yields and they should still be able to plant their safrinha corn within an acceptable window, which was not the case last growing season.

Goias - In the municipality of Mineiros in southern Goias, farmers have planted 70% of their soybeans and the planting should be completed in about 10 days. If the weather remains favorable, the director of the Rural Union of Mineiros/GO expects soybean yields to be in the range of 65-70 sacks per hectare (58-62 bushels per acre). The soybean harvest is expected to start about January 20th, which will allow enough time to plant the safrinha corn within the ideal planting window.

In the municipality of Rio Verde in southern Goias, farmers have planted over 50% of their soybeans compared to last year when planting was just getting started at this time. If the weather continues to be favorable, soybean yields should be in the range of 60 sacks per hectare (53.6 bu/ac) and all the safrinha corn should be planted during the month of February. According to the director of the Rural Union of Rio Verde/GO, farmers in the municipality have forward contracted only 25% of their anticipated soybean production.

Minas Gerais - In the municipality of Paracatu in northwestern Minas Gerais, the soybeans were 10% as of late last week. The summer rains have arrived a little earlier than normal and has caught some farmers before all their inputs were delivered. If the weather during the growing season is favorable, soybean yields should be in the range of 60 sacks per hectare (53.6 bu/ac).