The 2021/22 soybeans in Brazil were 78% planted as of late last week compared to 70% last year and 67% average according to AgRural. This reflects an increase of 11% for the week and it continues to be one of the fastest planting paces trailing only the 2018/19 growing season. The soybean planting in Mato Grosso is complete and less than 10% of the soybeans in Parana remain to be planted.

The predicted La Nina pattern of dryer-than-normal weather in southern Brazil may already be taking hold. The state of Rio Grande do Sul has 15-16% of Brazil's soybean acreage and the soybeans are about 30% planted, so it is still early in the growing season. If this dryer pattern persists for another few weeks, it could start to limit any potential increase in Brazil's soybean estimate.

Had this dryer pattern not started to develop, I was prepared to increase the Brazilian soybean estimate a little, but I have decided to be more cautious and leave it unchanged while we see how the weather develops in southern Brazil.

Mato Grosso - Farmers in the state had planted 99.5% of their soybeans as of late last week compared to 94% last year and 89% average. 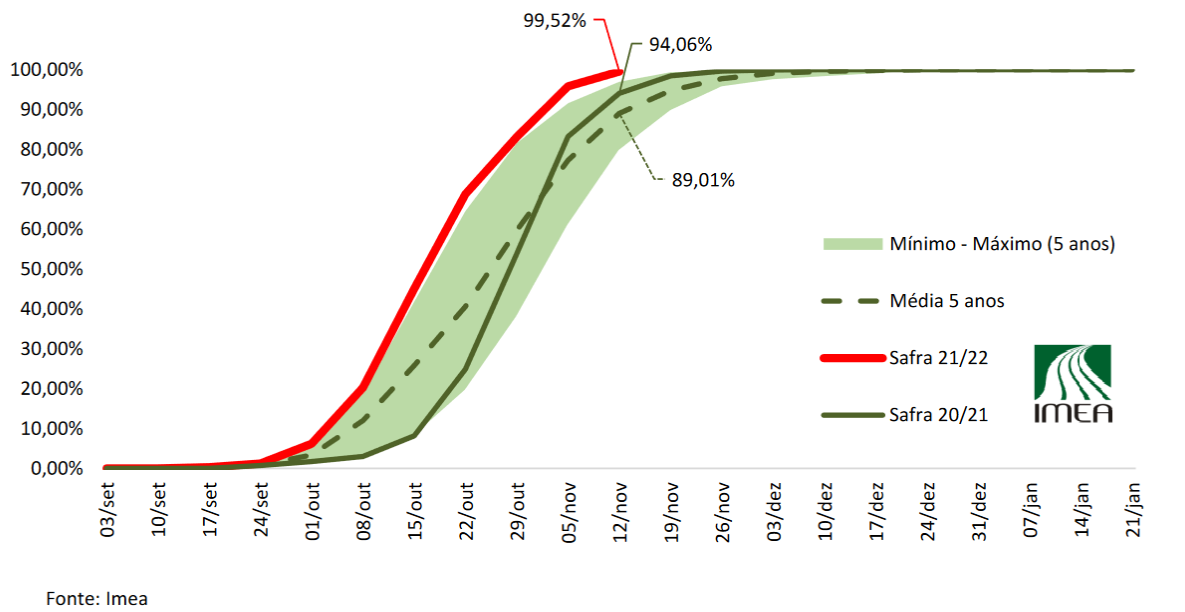 As you can see on the graph, this is the earliest planting in at least five years and farmers are confident about the potential soybean yields as well as being able to plant their safrinha corn within the ideal planting window. Imea has already indicated that they estimate that 92% of the safrinha corn will be planted within the ideal planting window that closes about the third week of February.

Parana - Farmers in Parana had planted 88% of their soybeans as of earlier last week according to the Department of Rural Economics (Deral). The soybeans are 20% germinating, 79% in vegetative development, and 1% flowering and the soybeans are rated 4% average and 96% good.

In many areas of the state, the soybean planting in Parana is nearing completion. In the municipality of Apucarana in northern Parana, the rains arrived in early October and stayed for most of the month. Some farmers even complained that the persistent cloudy conditions may have delayed some of the early soybean development. The soybean harvest should get underway in February allowing enough time to plant the safrinha corn in a timely manner. If the weather continues to be beneficial, soybean yields in the municipality could be as high as 74 sacks per hectare (66 bu/ac).

Rio Grande do Sul - Farmers in the state had planted 29% of their soybeans as of late last week according to Emater. In areas where the rainfall has been lighter, or they have sandier soils, the soybean planting has been interrupted while they wait for additional moisture. Emater is estimating that farmers in the state will plant 6.32 million hectares (15.6 million acres), which equates to approximately 15.6% of Conab's Brazil's 2021/22 soybean acreage of 40.27 million hectares (99.4 million acres).

A lot of the soybeans in the state are planted after the winter wheat is harvested and Emater reported that the wheat was 70% harvested as of late last week. The wheat harvest is moving quickly due to generally dryer conditions.

Mato Grosso do Sul - Soybean planting in many areas of the state should be completed this week. In the municipality of Maracaju in southern Mato Grosso do Sul, this planting season has been much better than last year. This year, the rains arrived early and planting started the first week of October. According to the president of the Rural Union of Maracaju, the soybean harvest should start in early February and yields could be as high as 65 sacks per hectare (58 bu/ac).

One thing different this year is that farmers are not forward contracting as much of their anticipated soybean production as last year for fear of missing higher prices going forward. Last year, farmers had forward contracted much of their crop early in the growing season only to see prices double by the time the crop was harvested.

Goias - In central Brazil, soybean planting is nearing completion in the municipality of Cristalina in eastern Goias. The soybeans are 95% planted and this has been one of the best planting seasons in recent years.

The municipality has the highest number of center pivot irrigation systems in Brazil which allows farmers to start planting their soybeans as soon as the "soybean free" period ends. Early planting of soybeans is critical for allowing enough time to plant the safrinha corn within the ideal planting window. The planting of other summer crops such as corn and dry beans has progressed quickly.

Farmers are concerned about the soybean prices that had declined in recent weeks. Several months ago, the forward price for soybeans was in the range of R$ 150.00 to R$ 155.00 per sack (approximately $12.60 to $13.00 per bushel), but the price earlier last week had declined to R$ 140.00 per sack (approximately $11.80 per bushel). Due to the increased costs of fertilizers and other inputs, farmers are concerned if they will be able to make a profit on their 2021/22 soybean production, especially if they end up with disappointing yields.

The increased production costs could also impact the safrinha corn crop which will be planted early next year. Marostica is advising farmers who have not yet purchased their inputs for the 2021/22 safrinha corn to consider substituting grain sorghum in the place of corn. Grain sorghum is cheaper to produce and it performs better than corn under reduced levels of fertilizers.