The 2021/22 Brazilian soybeans were 86% planted as of late last week compared to 81% last year and 77% average according to AgRural. This represents an advance of 8% for the week. The planting is essentially complete in Mato Grosso and Mato Grosso do Sul and nearly complete in Parana, Sao Paulo, Minas Gerais, and Goias. The two main areas that remain to be plated are Rio Grande do Sul and northeastern Brazil. Traditionally, these are the last two areas of Brazil where soybeans are planted.

Rainfall last week in Brazil was mostly across the central and northern areas. The forecast is calling for continued good rains in central and northern Brazil with dryer weather forecasted for southern Brazil during the first half of this week. A frontal system is expected to improve rainfall chances in Rio Grande do Sul during the second half of this week.

Brazil's southernmost state of Rio Grande do Sul has approximately 15% of Brazil's 2021/22 soybean acreage, which is second after Mato Grosso and slightly ahead of Parana (see table below). The state of Parana may end up with a higher soybean production because the yields in Parana are generally higher than in Rio Grande do Sul.

There are a couple of things to keep in mind about the state of Rio Grande do Sul. The weather in the state is more like Argentina and Uruguay than it is to the rest of Brazil. Most of the soybeans in the state are produced in the northern half of the state. The soils in the state are not as fertile as in Parana for example and their water holding capacity is not as good.

Some farmers in central Brazil are complaining about persistent cloudy conditions and excessive rain. I do not worry too much about the excessive rains at this point because the soils of central Brazil drain very quickly, but excessive rains at harvest can be a legitimate concern. Persistent heavy overcast weather can also be a concern because soybeans need sunlight, so if the sunlight is limited, potential soybean yields can be trimmed, but I do not think that is happening yet.

Mato Grosso - It has been a good planting season in Mato Grosso and one of the fastest in recent years as you can see on the graph below. In some years, the soybean planting is not completed until about the end of November, but this year, it was essentially complete by the start of November. The soil moisture is ample across the state, but some farmers would like to see less rain and more sunshine.

Municipality of Diamantino - Soybean planting is complete in the municipality of Diamantino in west-central Mato Grosso. The summer rains arrived in September allowing farmers to make rapid planting progress and some of the early planted soybeans are starting to flower. If the weather remains beneficial, the president of the Rural Union of Diamantino feels the soybean yields will surpass last year's yields of 55 sacks per hectare (49 bu/ac). The early soybean planting will allow for timely planting of the safrinha corn provided there are no heavy rains during the soybean harvest.

Below is the 2021/22 soybean planting pace in Mato Grosso from the Mato Grosso Institute of Agricultural Economics (Imea). 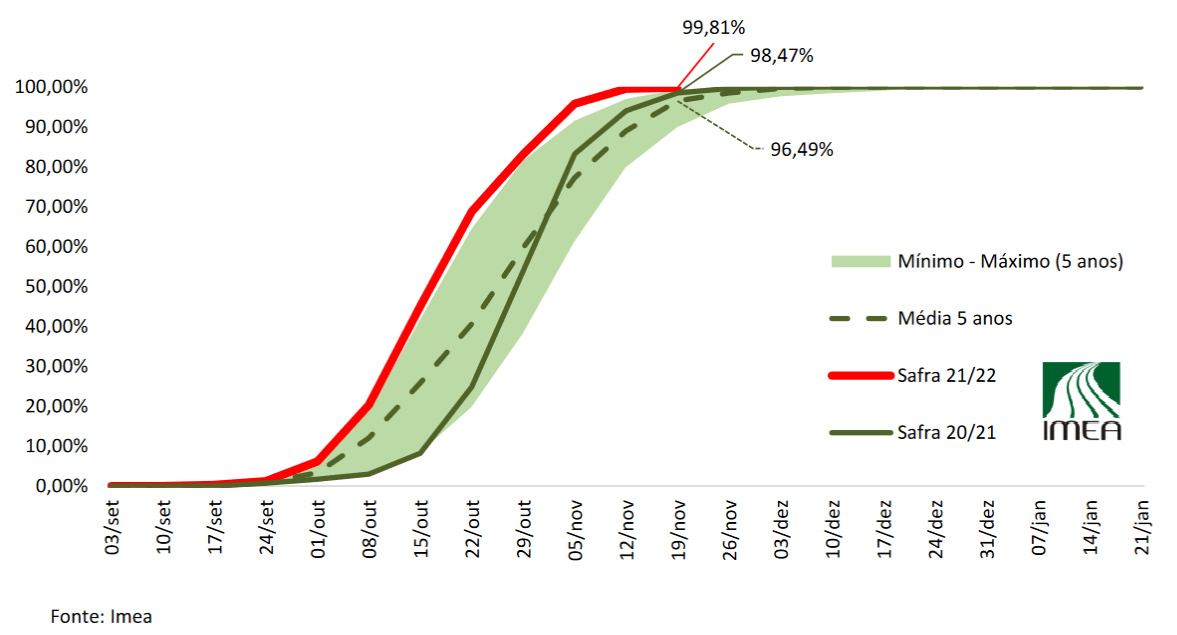 Parana - The soybeans in Parana were 95% planted as of earlier last week according to the Department of Rural Economics (Deral). The soybeans were 10% germinating, 85% in vegetative development, 5% flowering and the soybeans were rated 4% average and 96% good.

Farmers in Parana are not anxious to forward contract much of their anticipated soybean production even though prices are in the range of R$ 150.00 per sack (approximately $12.60 per bushel).

Rio Grande do Sul - The soybeans in the state were 52% planted late last week according to Emater. Dry weather last week slowed some of the soil preparation and soybean planting and the dry weather has already resulted in moisture stress for the corn.

The summer rains started in early October and planting conditions have remained good since then resulting in good growth and development of the soybean crop. Ifag is expecting the state to produce at least 14 million tons of soybeans, which would set a record for the state. The long-range forecast is calling for potential periods of dry weather in January, but farmers are not concerned because the soybeans will be nearing maturity at that time. The soybean harvest is expected to start by the end of January, which should allow the safrinha corn to be planted within the ideal planting window.

Farmers in the state are forward contracting less of their anticipated soybean production compared to last year. They do not want a repeat of last year when they sold too much of their crop too early only to see soybean prices double by the time the crop was harvested.

Minas Gerais - By the end of this week the soybean planting should be essentially complete in the state of Minas Gerais. The summer rains started in October allowing farmers to start planting earlier than normal. If the weather during the remainder of the growing season remains beneficial, the good start to the growing season would indicate that soybean yields in the state could surpass 60 sacks per hectare (53.6 bu/ac). If La Nina results in somewhat dryer conditions during the growing season, the statewide soybean yield might be more modest in the range of 55 to 60 sacks per hectare (49.1 to 53.6 bu/ac).

Now that we are in the middle of the soybean growing season in Brazil, I wanted to remind everyone about the relative size of the soybean production in the various Brazilian states. Below is a table of the top ten Brazilian states as far as soybean acreage is concerned. The acreage numbers are from Conab's November Crop Report. The top five states of Mato Grosso, Rio Grande do Sul, Parana, Goias, and Mato Grosso do Sul account for about 75% of Brazil's total soybean acreage.