Once again, the weather last week was mostly dry in southern Brazil and mostly wet in central and northern Brazil. I would estimate that 35-40% of Brazil's soybeans are in the dryer areas and that 50-60% are in the wetter areas, but that is just a rough guess.

Farmers in the municipality of Candido Rondon in western Parana have harvested a few drought impacted soybean fields with yields of 8 sacks per hectare (7 bu/ac). These were 120-day maturity soybeans that were harvested at 90 days. Soybean yields in the municipality are expected to be down 65% and the first corn crop yields are expected to be down 85%. This is probably a worst-case scenario for the state.

Farmers in central and northern Brazil have been complaining for three months about the overcast skies, heavy rain, and lack of sunshine and unfortunately the forecast is calling for more of the same. The wet conditions have led to localized flooding and kept farmers from applying needed fungicides and insecticides. After days of torrential rains in southern Bahia, two dams burst on Saturday resulting in widespread flooding and evacuations. There is little commercial agriculture in the region, but it is an example of how the rain has been distributed in Brazil this growing season.

A few fields of soybeans in Mato Grosso may be harvested by the end of the week, but wet weather has slowed the harvest maturity. If these wet conditions persist for another 1-2 weeks, it could become a legitimate concern for the soybeans in the region.

Once a soybean plant reaches harvest maturity and the desired seed moisture (13-14% would be ideal), each time the pods go through a wet and dry cycle, there is an increased chance of moldy soybeans and poor seed quality. If harvest-ready soybeans in Mato Grosso stay constantly wet for 5-6-7 days, the seeds may start to sprout in the pods, which can cause huge losses.

One thing to remember, the weather in Mato Grosso and central Brazil at this time of the year can be hot with very high relative humidity and potentially off-and-on rain day and night. Under these conditions, it does not take long for the seed quality to deteriorate.

Mato Grosso - The soybean crop in Mato Grosso continues to benefit from abundant rain, maybe too much in fact in some areas. Farmers will be ready to start harvesting some early soybeans in a week or two if the weather dries out somewhat. Early yields out of Mato Grosso should be spectacular. The one concern in Mato Grosso would be if the current wet weather persists going forward as the harvest advances.

Parana - The 2021/22 soybean crop in the state of Parana in southern Brazil suffered another downgrade in conditions and a lowering of the production estimates. The entire state has been under the influence of La Nina resulting in hotter and dryer conditions than normal. The weather started to turn dryer in mid-November and there has been little rainfall since then. The near-term forecast is only calling for light and scattered showers in the state.

Earlier last week Deral rated the soybeans at 13% poor, 30% average, and 57% good. The percentage of the crop rated good was down 14 points from the previous week. A month ago, the crop was rated over 95% good.

Farmers in the municipality of Candido Rondon in western Parana have harvested a few drought impacted soybean fields with yields of 8 sacks per hectare (7 bu/ac). These were 120-day maturity soybeans that were harvested at 90 days. Soybean yields in the municipality are expected to be down 65% and the first corn crop yields are expected to be down 85%.

The governor of Parana announced last week that his declaration of a water emergency will be extended for another 180 days. The state has been in a drought for two years with the first emergency declared in May of 2020. Under the deceleration, everyone is encouraged to reduce water consumption and priority will be given to public water supplies.

Rio Grande do Sul - Farmers in Rio Grande do Sul made little progress in planting their soybeans last week due to dry conditions. Emater reported that 92% of the soybeans had been planted as of late last week and that 5% had started to flower. Soybean growth is reported to be slow and the plants are smaller than normal.

In the driest areas there are still about 20% of the soybeans left to plant and farmers are not going to plant until they receive additional moisture. Additionally, farmers only have until December 31st to plant their soybeans if they want to qualify for crop insurance.

In the municipality of Frederico Westphalen in northwestern Rio Grande do Sul, hot and dry conditions have kept farmers from finishing their soybean planting and the recent light and scattered showers did not resolve the problem. The soybeans are 13% flowering and farmers fear they have already lost at least 10% of the yield potential.

The most advanced soybeans in the state are flowering with most of the crop in vegetative development. The dry weather in Rio Grande do Sul continues to be a major concern. Some of the soybeans will need to be replanted due to poor germination and the early soybean growth may be slowed due to the dry conditions. Rainfall last week was generally light and scattered and was certainly not enough to relieve the moisture stress.

Northeastern Brazil- This region of Brazil is generally one of the driest areas of Brazil, but not this year. The summer rains came early and, in some regions, they have received too much rain. In the important growing area of western Bahia and southern Maranhao and southern Piaui, the soybeans were planted early and the crop development has been good. Farmers in the region are hoping for good yields, but they are worried about increases disease pressure due to the wet conditions. Northeastern Brazil accounts for approximately 11% of Brazil's soybean production.

Tocantins - Heavy rains continue to be a concern for soybean producers in the state of Tocantins. A spokesperson for the Soybean Producers Association of Tocantins (Aprosoja-Tocantins) feels the persistent wet conditions are already trimming soybean yields due to increase diseases as illustrated in the picture below. This picture was taken by a producer in southern Tocantins and published in Noticias Agricolas on Monday, December 27, 2021. The seeds are rotted in the pods and the situation is probably going to continue to get worse if it keeps raining. 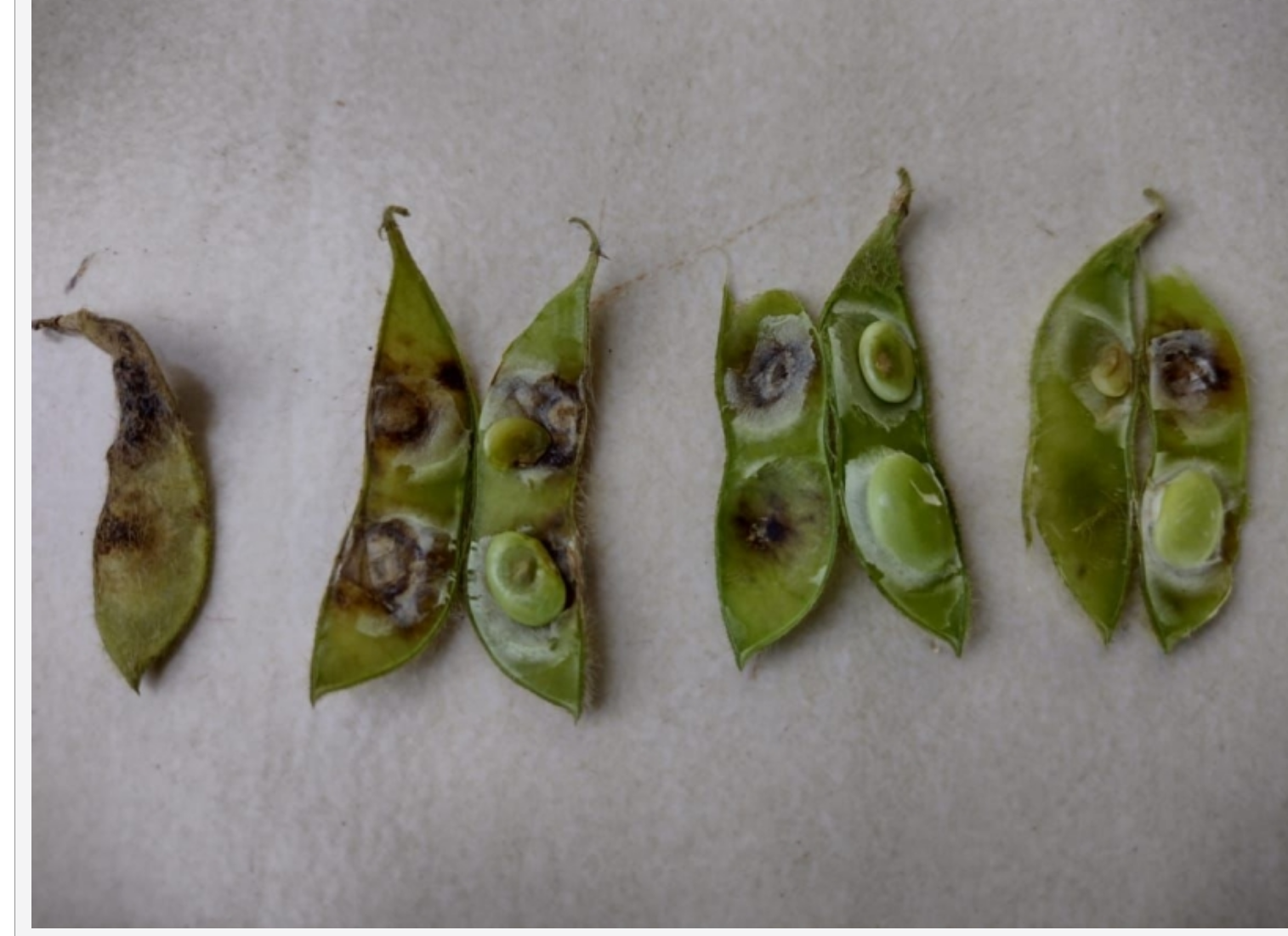