Rainfall over the weekend in Brazil was primarily in the far northern areas such as Mato Grosso and Tocantins and in southern Rio Grande do Sul. Dryness remains widespread across southern portions of the safrinha corn belt. The forecast for this week calls for chances of rain in far northern and far southern Brazil. There are improved chances of rain in central Brazil in the 6-10 day period.

The 2021/22 soybeans in Brazil were 55% harvested as of late last week compared to 35% last year according to AgRural. This represents an advance of 11% for the week.

Mato Grosso - Farmers in Mato Grosso had harvested 90% of their 2021/22 soybeans as of late last week compared to 67% last year and 83% average according to the Mato Grosso Institute of Agricultural Economics (Imea). The slowest harvest is the south-central region where 75% of the soybeans were harvested. The graph below from Imea shows the soybean harvest progress in Mato Grosso (red line). 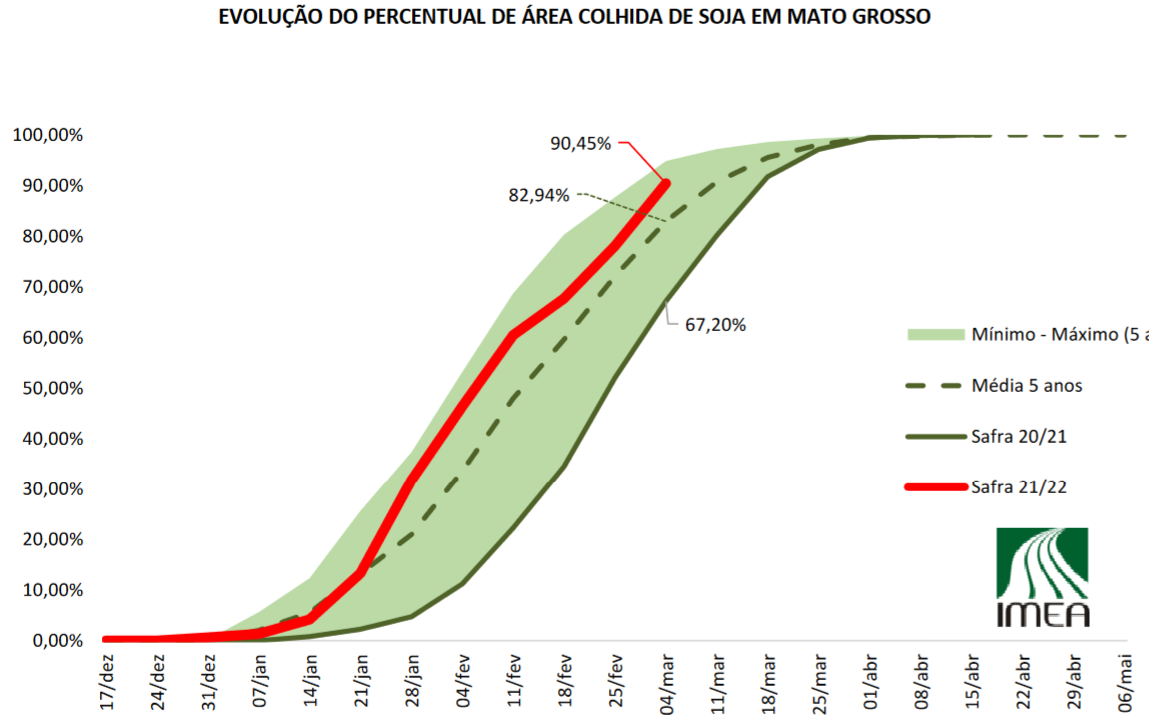 Parana - The soybean harvest in Parana is approaching 50% with the fastest harvest in the western region of the state where the weather was the hottest and driest. Recent rains should benefit the later planted soybeans especially in the eastern part of the state.

Rio Grande do Sul - Farmers in the state had harvested 3% of the soybeans as of late last week with another 20% maturing according to Emater. Recent rains benefited the latest planted soybeans, but they came too late for the earlier planted soybeans. Yields are extremely variable with some fields not even harvested to other fields yielding as much as 3,000 kg/ha (44.7 bu/ac). Statewide, soybean yields will probably be down 40-60%.

Conab will release their March Crop Report on Thursday, March 10th. The report is expected to incorporate data they collected from their special crop survey conducted in southern Brazil during the month of February. My guess is that they will estimate the 2021/22 Brazil soybean production in the range of 120 to 124 million tons. Their February estimate was 125.4 million tons.