Conab lowered their 2021/22 Brazil soybean estimate 2.7 million tons in their March report to 122.7 million tons. It was no surprise that they lowered their estimate after they conducted a special crop survey in southern Brazil during the month of February to assess the damage caused by the drought.

The Brazilian soybeans were 64% harvested as of late last week compared to 46% last year according to AgRural. This represents an advance of 9% for the week.

Mato Grosso - Farmers in Mato Grosso had harvested 96.7% of their 2021/22 soybeans as of late last week compared to 80.1% last year and 90.7% average according to the Mato Grosso Institute of Agricultural Economics (Imea). This represents and advance of 6.3% for the week.

Imea trimmed their soybean production estimate for the state last week from 39.47 million tons to 39.19 million. The estimated the statewide soybean yield at 59.84 sacks per hectare (53.4 bu/ac), which was down 0.6 bu/ac from their previous report. The yields were lowered in the south-central part of the state due to heavy rains during harvest which resulted in lower yields and poor-quality soybeans. Western Mato Grosso is reported to have the highest yields at 61.8 sacks per hectare (55.2 bu/ac). Below is the soybean harvest progress (red line) published last Friday by the Mato Grosso Institute of Agricultural Economics (Imea). 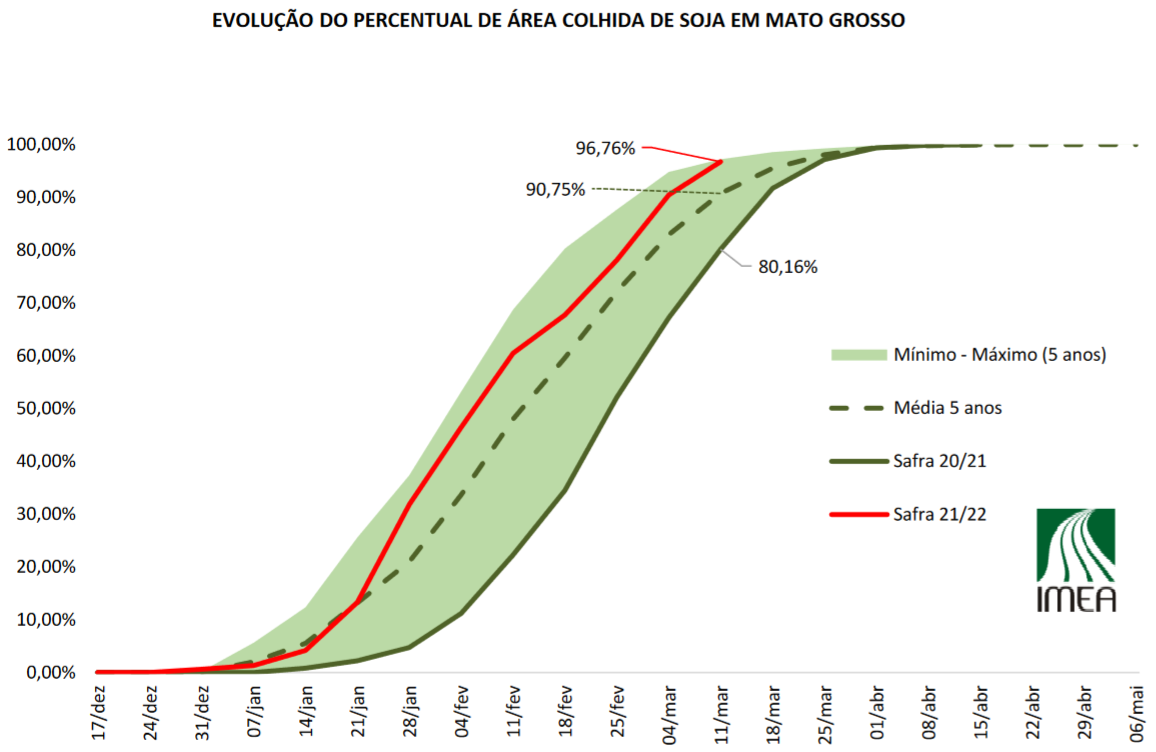 Parana - The soybeans in Parana were 54% harvested as of late last week according to the Department of Rural Economics (Deral). The remaining soybeans were rated 24% poor, 30% average, and 46% good.

In the municipality of Marechal Candido Rondon in far western Parana, the soybean harvest is complete with many farmers reporting yields in the range of 6 to 8 sacks per hectare (5 to 7 bu/ac). The president of the Rural Union of Marechal Candido Rondon/PR indicated that the highest yields in the municipality are in the range of 18.5 sacks per hectare (16.5 bu/ac). The drought hit the hardest in far western Parana.

Rio Grande do Sul - Farmers in the state had harvested 6% of their soybeans as of late last week compared to 1% last year and 7% average according to Emater. This represents an advance of 3% for the week. Early yields are very low because the soybeans being harvested were hardest hit by the drought. Some fields were abandoned because there were not enough soybeans to pay for harvesting.

Goias - The state of Goias probably had the best weather during the growing season of any major grain producing state in Brazil. The soybean acreage increased 2.2% to 4.0 million hectares (9.8 million acres) and the average yield is estimated at 3,900 kg/ha (58.1 bu/ac). The state's soybean production is estimated at 16 million tons, which is up 10.2% compared to last year. Normally, Goias is the third largest grain producing state in Brazil behind Mato Grosso and Parana, but this year, it will surpass Parana and move into second place due to the drought in Parana.

In the municipality of Jatai in southwestern Goias, the weather during the growing season was very beneficial for the soybeans and some farmers are expecting soybean yields as much as 15% above the historical average. According to one local producer, his soybeans usually yield in the range of 73 to 74 sacks per hectare (65 to 66 bu/ac), but this year, the yields in the best fields are approaching 85 sacks per hectare (76 bu/ac). The price for soybeans in the municipality is in the range of R$ 186 to R$ 192 per sack (approximately $16.57 to $17.11 per bushel).

Minas Gerais - In the municipality of Paracatu in western Minas Gerais, farmers have harvested 60% and yields are averaging 65 sacks per hectare (58 bu/ac) and the expectation is that the yields may go higher when the later maturing soybeans are harvested. At the start of the growing season, farmers were forward contracting their soybeans for R$ 150 per sack (approximately $13.36 per bushel). Soybean prices in the region are now as high as R$ 180 per sack (approximately $16.05 per bushel).