Brazilian farmers had planted 24% of their soybeans as of late last week compared to 22% last year and 15% average according to AgRural. This represents an advance of 14% for the week. The planting season in Brazil continues to get off to a good start, but moisture is needed in eastern Mato Grosso, northern Goias, Minas Gerais, and northeastern Brazil.

Mato Grosso - The farmers in Mato Grosso had planted 41.3% of their soybeans as of late last week compared to 45% last year and 24.1% average according to the Mato Grosso Institute of Agricultural Economics (Imea). This represent an advance of 22.7% for the week, which is a really good week of planting. The most advanced planting is in western Mato Grosso where 55% of the soybeans have been planted. The slowest planting is in the northeast region where 19% of the soybeans have been planted. 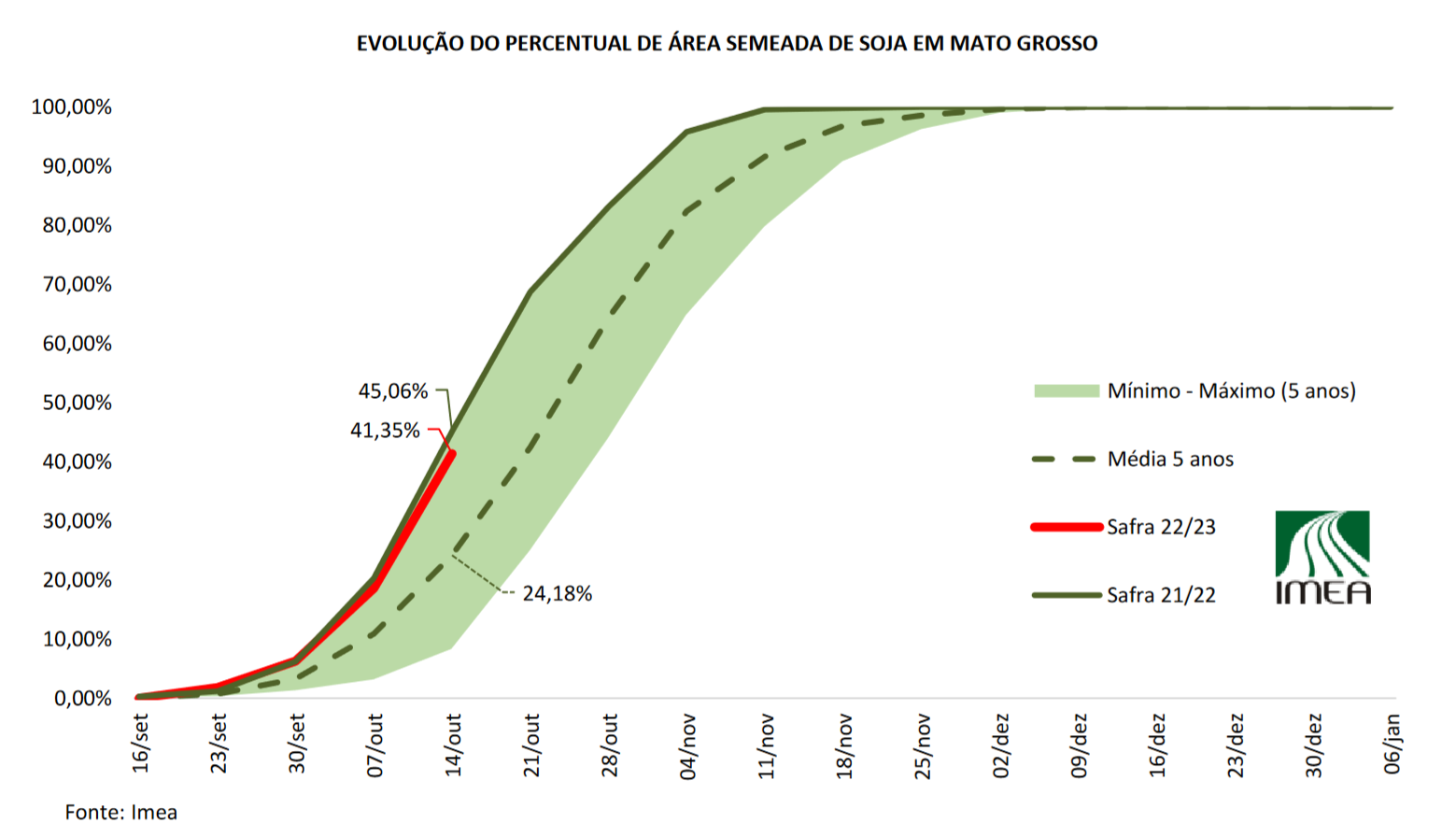 Parana - Farmers in Parana had planted 26% of the soybeans as of earlier last week compared to an average of 34% according to the Department of Rural Economics (Deral). This represents an advance of 11% in a week. The soybeans are 65% germinating, 35% in vegetive development, and they are rated 2% average and 98% good. Some soybeans in southwestern Parana may need to be replanted due to excessive moisture.

In the municipality of Dr. Camargo in northern Parana, the soybean planting started on September 12-15, but planting has not yet reached 50%. Rainfall has been excessive since late September with some areas of the municipality only 30% planted. Soybeans planted during October can still produce good yields and farmers are expecting 50 to 55 sacks per hectare (44.7 to 49 bu/ac). Farmers have been slow to forward contract their anticipated soybean production because they are worried about the long-range forecast for below normal rainfall in November and December.

Farmers are concerned that the delayed soybean planting will push the safrinha corn planting past the ideal planting window.

In the municipality of Marechal Candido Rondon in southwestern Parana, the soybean planting started on September 11th and it is complete. The soybean harvest should start January 15 to 20, and if the weather cooperates, yields should be in the range of 65 sacks per hectare (58 bu/ac). This should also allow for a good window to plant the safrinha corn.

In the municipality of Laguna Carapa in southern Mato Grosso do Sul, soybean planting started on September 17th, but it has progressed slowly due to excessive rainfall. Soybean planting is running 25 to 30 days later than normal. If the weather cooperates during the growing season, the late planting by itself should not negatively impact soybean yields and farmers are hoping for yields in the range of 68 to 70 sacks per hectare (60.7 to 62.5 bu/ac). The delay in planting soybeans could impact the safrinha corn.