The Brazilian soybeans were 1.8% harvested late last week compared to 4.7% last year and 3.4% average. Mato Grosso leads the way with 5.9% of the soybeans harvested and a few soybeans have been harvested in Goias, Bahia, and Rondonia, but wet weather in central Brazil has slowed the early start of the harvest.

Recent rainfall has been the heaviest in central Brazil especially in Mato Grosso, Goias, Tocantins, and Minas Gerais. The forecast continues to call for more rain, but maybe not quite as heavy as in recent weeks. The southernmost state of Rio Grande do Sul received some rainfall last week, but more is needed to improve the soil moisture.

Mato Grosso - Farmers in Mato Grosso had harvested 5.9% of their soybeans as of late last week compared to 13.3% last year and 9.1% average. This represents an advance of 3.5% for the week. The harvest is most advanced in the northern and western parts of the state where approximately 10% of the soybeans have been harvested. The slowest harvest is in the northeastern part of the state where less than 1% have been harvested.

Yields in northern Mato Grosso where the harvest is most advanced are reported to be very good. Ag Resource conducted a four-day tour through northern Mato Grosso with an average yield of 60.3 bu/ac compared to Conab's current estimate of a statewide yield of 53.5 bu/ac. The highest yields were expected from the northern part of the state which has seen beneficial weather the entire growing season.

The graph below from the Mato Grosso Institute of Agricultural Economics (Imea) shows the 2022/23 soybean harvest in Mato Grosso (red line). 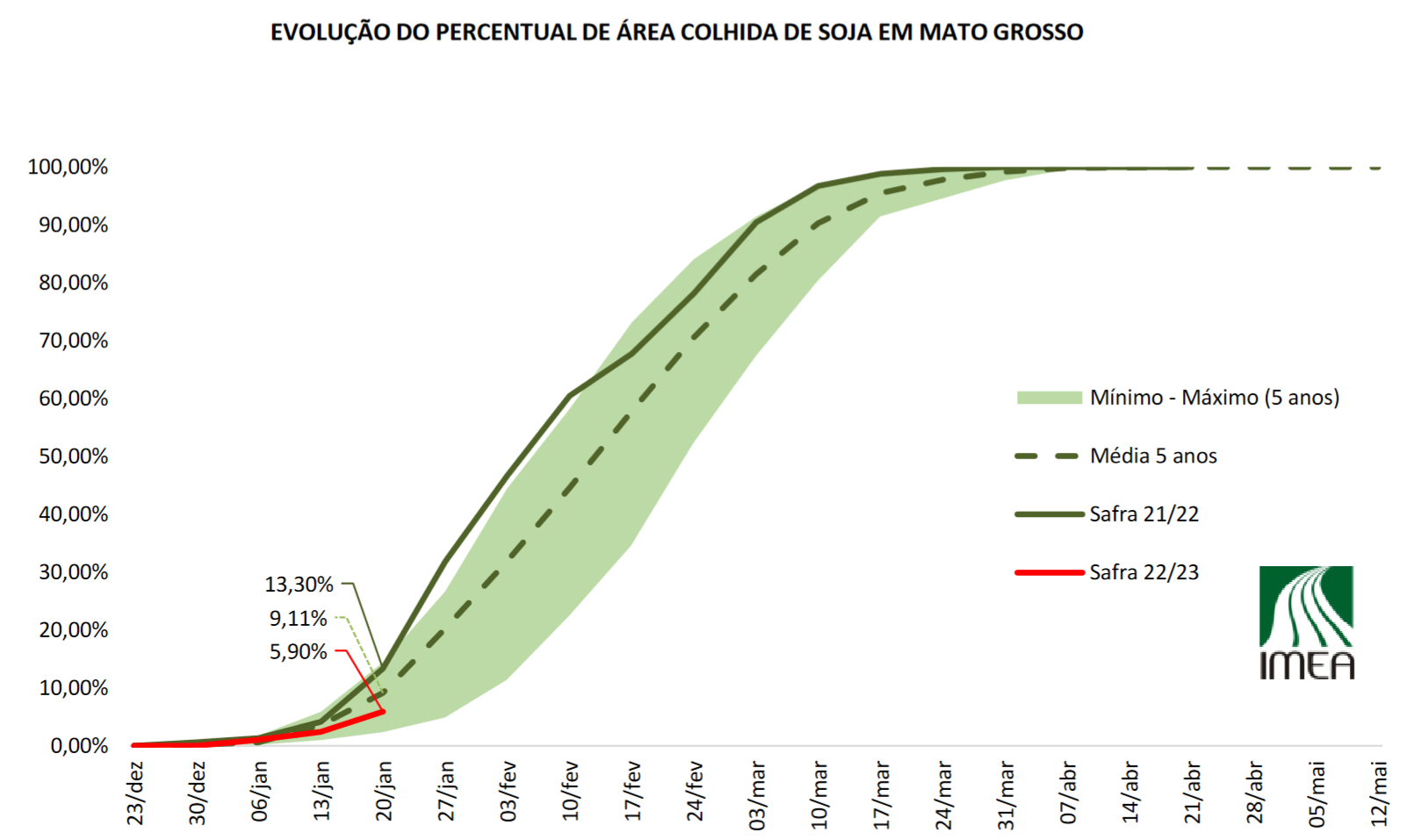 Parana - The soybeans in Parana were 11% in vegetative development, 25% flowering, 60% filling pods, and 4% maturing as of earlier last week according to the Department of Rural Economics (Deral). The soybeans were rated 5% poor, 15% average, and 80% good.

Municipality of Pato Branco - In the municipality of Pato Branco in southern Parana the soybean harvest is just getting underway and farmers are expecting a good crop. The early maturing soybeans were impacted by dry weather and are expected to yield approximately 50 sacks per hectare (44.7 bu/ac). The later maturing soybeans, which account for the majority of the crop, were not impacted as much and are in very good condition.

The later planted soybeans in the state could still recuperate if the weather improves, but the president of Fecoagro/RS estimates the soybean yield losses in the range of 0% to 40% with the average loss statewide of 16%.